"I have good feeling about this fight!"
—Zangief

Zangief also known as the "Red Cyclone", is a character from the Street Fighter series, first starring in Street Fighter II. He is a national Russian hero who is always seen fighting for the glory of his country.

A hero of Russia who is aptly named the Red Cyclone. His love for his country outstrips anyone else, and to show the world the strength of his motherland, he fights day in and day out. He is a man with a finely honed body of muscle and power.

Zangief is a massive fighter, standing slightly over 7 feet tall and weighing 254 lbs. Zangief has been protrayed with a beard and a mohawk, along with a uniquely-shaped formation of chest hair on his torso and on his shins. His massive frame is almost entirely covered in scars from his bouts with brown bears in the barren and remote area of Siberia. Zangief's wardrobe consist of a simple red-colored wrestling speedo with a gold belt, along with red and gold wristbands and his red wrestling boots.

Zangief is an incredibly patriotic character who has been motivated in some way to fight for his Motherland in every single game he has ever been in. Zangief's overwhelming sense of patriotism for his home country can sometimes make him easily misled. Zangief is a very tactiful fighter who's prone to quick temperments, and is always very competitive.

Despite his short temper, Zangief has shown himself to be rather gentle-natured at times, once entering a tournament partly to win the admiration of a group of school children. While not fighting, Zangief enjoys cossack dancing, vodka, and borscht. Some of the things which he doesn't like includes young women (because he views them as a distraction) and bears that don't know how to wrestle properly.

Zangief is a national Russian hero nicknamed the "Red Cyclone" who becomes acquainted with General Secretary of the CPSU, and Soviet President, Mikhail Gorbachev, who promised the country's full support in exchange for traveling around the world and showing off the might of the Soviet Union (and to improve Gorbachev's image abroad). After meeting Gorbachev, Zangief is sent to train in the Siberian wastes, wrestling bears.

Under orders from Gorbachev, Zangief is sent to combat the forces of Shadaloo, which is beginning to spread its corruption into Russia. Zangief encounters many fighters along the way, befriending some such as E. Honda and R. Mika. It is believed that he lost to Blanka before he could accomplish his final objective of destroying the Psycho Drive; however in his ending, he and Honda team up to destroy it (the canonicity of this ending is dubious). Nevertheless, the Psycho Drive gets destroyed by someone, at least, and Zangief returns to Russia satisfied.

He then participates in the second World Warrior Tournament, hosted by Shadaloo, at the behest of Gorbachev. He loses to either Ken or Ryu, after the tournament, Zangief - dissatisfied with the outcome - returns to training in the Russian wilderness, wrestling bears. He is approached by the largest wrestling organization in the world with an eye to signing the "Red Cyclone" to their promotion. Zangief at first refuses, saying that he is less interested in money than he is in bringing honor to Russia by demonstrating Russian strength. He is promised a stage to better showcase his skills, with his matches watched by millions. Due to the obvious help this will bring to his will to show Russian strength Zangief accepts.

Zangief enters the World Tournament held by S.I.N. to prove to his young fans (some of whom are beginning to claim that martial artists are better) that he's still got it. After the tournament, Zangief frantically realizes that he hasn't gotten a souvenir, and says "I didn't even understand what the last guy was saying before I beat him". He then has an idea and takes a photograph holding the beaten Seth (main boss and host of the tournament) in a headlock, which is then viewed by the admiring young fans who recognize Seth as the "bad guy from the TV".

Zangief is a close-range character, as he is a wrestling type. Many of his moves are more complicated to pull off, due to the 360 motions input required to perform the moves, making him a character for advanced players. His devastating throws and powerful base moves make him tough up close, though he often has trouble with foes with projectiles. 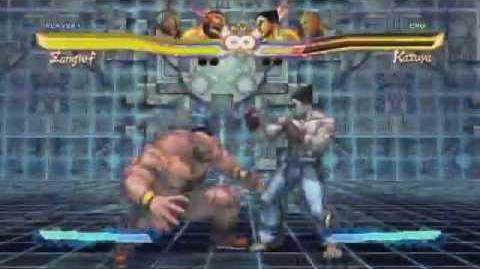 Zangief and Rufus as seen in their prologue

Zangief has good feeling about this fight

Zangief as seen in his and Rufus' reveal trailer

Zangief and Rufus' swap costumes, based on Kuma and Angel respectively

Zangief on the Street Fighter Wiki