Yoshimitsu is a character from the Tekken series who was first introduced in the original Tekken game and since then has returned for all subsequent sequels.

Yoshimitsu has also carried over into Namco’s Soul series of fighting games as a major character, making his debut in Soul Calibur and returned for all of the sequels.

As the mysterious head of the Manij clan, Yoshimitsu steals from evil companies and spreads their wealth to the poor. Although he has a serious temperament, he also shows flashes of stupidity.

Yoshimitsu wears a full bodied grey armor with red parts designed to look like exposed muscle tissue, as well as back armor that resembles a spine. Discarding the masks, he wears a menacing helmet with the appearance of a skeletal demon. His gauntlets are black and his hakama tucked into his greaves, although it is dark green with gold decorations. His CGI model in cutscenes and art for this game contains some slight revisions to the outfit, suggesting that the in-game model is a slightly earlier, less elaborate draft.

His sword is curved and looks more like a tachi than a katana. It doesn't have a handguard and glows with a green aura, indicating its now-apparent magical properties. The hilt is a greyish-blue color.

Yoshimitsu is a noble, humble, honorable and proud ninja who respects life and compassion from all of humanity, he is also a very wise leader of the Majin Clan and hates injustice and dishonorable warriors who attack the weak, he also enjoys fighting with honorable warriors to test his might and their own. He is also a very friendly to those, and will even help those in need of saving and danger.

As head of the Manji party, Yoshimitsu entered the King of Iron Fist Tournament as a distraction, to allow the Manji to steal the tournament's funds unobserved. Whilst participating, Yoshimitsu encountered Ganryu, a corrupt sumo wrestler. Contemptuous of Ganryu's disrespect for the sumo code, Yoshimitsu stole Ganryu's ill gotten money and gave it to the poor.

Boskonovitch created the Cold Sleep machine during his experiments in his search for eternal life. The still unproven technology was used to preserve his young daughter, who suddenly passed away. Yoshimitsu raised research funds as the leader of the Manji party. Yoshimitsu visited Boskonovitch when he learned of the many martial artist disappearances. Yoshimitsu was surprised to find Boskonovitch suffering from a mysterious pathological organism. Boskonovitch claims he needs blood from Ogre to live. Indebted to Boskonovitch for saving his life, Yoshimitsu enters the tournament to help an old friend, and manages to get a sample of Ogre's blood after the tournament.

As the leader of the Manji Party, Yoshimitsu dedicated himself to providing food, medical assistance, and shelter to the ever-increasing number of political refugees around the world, but with a constant lack of necessary funding and manpower, Yoshimitsu was unsure about the future of his organization. When Yoshimitsu heard about The King of Iron Fist Tournament 4, he envisioned a union between the Manji Party and the Mishima Zaibatsu. With this dream in mind, Yoshimitsu decides to enter the Tournament immediately. While breaking into the Mishima Zaibatsu's vault, he found an injured Bryan Fury and helped him escape.

A month later, Yoshimitsu visits Dr. Boskonovitch's lab to find his comrades dead at the hands of Bryan. Learning Bryan will fight in The King Of Iron Fist Tournament 5, Yoshimitsu sharpens his sword and enters the fray to get his revenge. Yoshimitsu's repeated attacks hindered Bryan's tests and hopes of unlocking its ultimate power of the perpetual generator.

While trying to avenge his fallen Manji clan comrades, Yoshimitsu realizes that his sword is weakening. His cursed sword retained its power by killing evil doers and villains, otherwise the cursed sword will make the user go insane. Yoshimitsu realizes that he can no longer use his old sword and decides to use another blade called Fumaken, that seals the properties of the cursed sword. He then decides to enter The King of Iron Fist Tournament 6.

Yoshimistu is very unquie, and unorthadox character. He still retains alot of his iconic Tekken strings like his "slap you silly" backfist, and his harakiri sword stab. 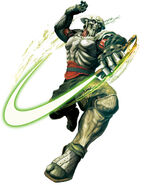 Yoshimitsu and Raven as seen in their prologue

Yoshimitsu during his pre-fight introduction

Yoshimitsu on the Tekken Wiki