"I'm ready for whatever you got!"
—Ling

Ling Xiaoyu is a character from the Tekken series who was introduced in Tekken 3 as a 16 year old girl and has returned in every subsequent release. She has become one of Tekken's most popular characters since her debut, appearing in movies and award shows since her debut.

Xiaoyu wears an orange sleeveless modified qipao with white feathers on both of her shoulders, a white shorts with black and yellow lines in both sides on her shorts and an orange tutu shoes with black line designs.

This outfit is a minor change outfit from Tekken 5: Dark Resurrection from pink to orange and becomes her primary outfit in Tekken 6 until it became as one of her customizations in Tekken 7.

Xiaoyu appears to be childish, energetic and friendly to her schoolmates including Miharu and Jin and later Alisa. During the events in Tekken 6, her role becomes similar to Jun Kazama and wants to save Jin from being evil while in Scenario Campaign as the boss in Mishima Polytechnic, Xiaoyu shows her concern to Jin and does not want him to make any awful things as the latter does not want her concern and angrily makes her to fight him stating that she will not take it as his answer and he's not going anywhere.

In Street Fighter X Tekken, Xiaoyu maintains her childish and energetic personality but being obnoxious to other female fighters that she needs to face. During their rival battle, She shows to be angry to both Chun-Li and Cammy to think they will seduce Jin with their tramp clothes and to steal it from her. But Chun-Li introduces to Jin in a flirtatious manner making herself angry further as Jin halts her to stop of what she was doing but roars like a cat to them when Jin tells them that he's not interested to their warrants.

Ling Xiaoyu, born and raised in China, is a student at Mishima High School in Japan. Ling Xiaoyu is also a schoolmate of Jin Kazama and Miharu Hirano. Xiaoyu's fighting style was brought on with some influence from her distant relative, Wang Jinrei.

This girl loves amusement and theme parks. Her dream is to build the perfect amusement park in China when she grows up. She is both young and small in stature but Ling is a skilled martial arts expert. Many believe if she was more serious she could achieve real greatness. Having learned that the Mishima Financial Empire is rich and powerful she seeks out Heihachi (president and CEO) to make her dream a reality.

While vacationing in Hong Kong with her family, Ling stowed away on a yacht bearing the name, Mishima Financial Empire. Heihachi was not on board but Mishima's men discovered her soon after the ship left port and Heihachi was informed immediately. Upon his arrival, Heihachi found his men beaten and strewn around the ship as if it was hit by a hurricane. She threatened that she would go berserk again if he did not accept her challenge. Roaring with laughter, he promises to build the amusement park of her dreams if she wins the tournament.

Ling was a junior at Mishima High School. She still lived, studied and trained as a ward of the Mishima Zaibatsu. But lacking any particular goals, Ling grew tired of her everyday routines. However, one day, she received an anonymous e-mail that warned her of Heihachi’s evil intentions and the danger to her life. Ling replied to the e-mail, but she did not receive any further messages from the anonymous individual. Ling’s intuition told her that Jin, who had been missing since the last Tournament, could have sent the message. She believed the message and started to suspect Heihachi and the Mishima Zaibatsu. Upon hearing the announcement of the next Tournament, Ling made the decision to enter — hoping to be reunited with Jin and to unveil the truth behind Heihachi and the Mishima Zaibatsu.

Ling is a high school student who is on a personal mission to save the Mishima family. In the previous tournament, Ling was saved from the evil plans of Heihachi by Yoshimitsu, who taught her the history of the Mishima family. Hearing this, Ling began to believe that the root of all misfortune surrounding the Mishimas started with Heihachi's cruel upbringing of Kazuya. When Ling heard of the death of Heihachi, a tear came to her eye. "If only I could turn back time..." Ling said with a hint of sadness and regret. Later, Ling happens to meet a brilliant scientist who claims that he can make a time machine as long as he gets the funding for development. Under the condition that she will be first to use the machine, Ling pulls out the wadded scrap of paper in her pocket... an invitation to the King of Iron Fist Tournament 5.

Ling Xiaoyu breathed a sigh of relief when she heard Heihachi had not truly died. However, as head of the Mishima Zaibatsu, Jin Kazama aims to take Heihachi’s life. Xiaoyu was going to try and stop Jin herself, but the Zaibatsu pushed towards militarization, making it difficult to approach Jin. The Mishima Zaibatsu’s declaration of war drew hostility from around the globe. When the King of Iron Fist Tournament 6 is announced, Ling Xiaoyu enters in the hope that she can save Jin’s soul from evil.

Ling Xiaoyu does Hakkesho (which is also known as Piguaquan), and Hikaken (which is known as Baguazhang) martial arts styled fighting. Her style is very graceful in the way that she uses it, and in this game they added a bit of a pink aura-like magical addition to when she will preform number of certain attacks.

Since every character is in the Street Fighter world, they had to be creative with Tekken's movesets (since it is in 2D). And they did a great job, and were very creative with her 2D moveset, and is a great character to play with (in my opinion). 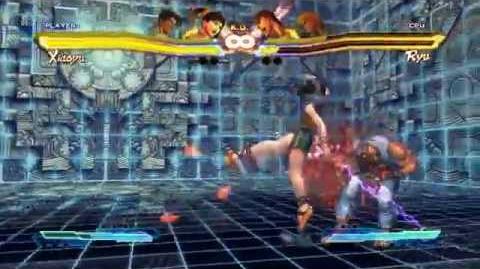 Xiaoyu as seen in her reveal trailer

Xiaoyu as seen in her and Jin's prologue

Ling Xiaoyu at the Tekken Wiki