This article is about the Spanish clawfighter. If you are looking for the Shadaloo dictator known as "Vega" in Japan, see M. Bison.

Vega's fighting style is a blend of Spanish Ninjutsu and bullfighting thus earning him a nickname "the Spanish Ninja".

As a top level Shadaloo member, Vega is a maniacal sadist who enjoys tormenting his victims. He is obsessed with the idea of beauty and fights to rid the world of everything he deems ugly. Vega hides his face behind a mask, and with grace he soars through the air and takes down his opponents with style. He is often called the "Spanish Ninja". Under orders from M. Bison, Vega and Balrog head to Antarctica to retrieve Pandora.

Vega is one of the few Street Fighter characters to constantly carry a weapon. His claw is useful for both stabbing and slashing, and gives him a very long range compared to most characters. Vega does not wear his expressionless mask to conceal his identity; the mask is purely to protect his face from scarring or bruising during battle. Vega wears blue-purple and yellow ceremonial trousers, a red sash, loafers, and white leggings of a matador. This decorative garb offers matadors ease of movement, and is ideal for Vega's acrobatic maneuvers. Vega has long brown hair that he keeps braided in the back. Vega has a purple snake tattoo on his chest, which also circles his arm.

Vega is a narcissistic, effeminate self-lover. He is arrogant and convinced of his own abilities and invulnerability almost to the point of megalomania. He can be incredibly sadistic - sometimes to the point of being psychopathic and bloodthirsty - and takes great pleasure in seeing the ugly murdered through his own doing. Vega's unbridled and solipsistic ego is shown even in his taste in interior decor, as his mansion is decorated with portraits all of him. However, he is also attracted to and impressed by the beauty and strength of young women, notably Chun-Li.

Vega was born to a privileged noble family. When their status dwindled, Vega's mother remarried for financial security. As he matured, Vega studied bullfighting, then went to Japan to learn ninjutsu, a style he believed meshed well with his natural grace and agility. Combining bullfighting with ninjutsu, Vega went into an underground cage fighting circuit, and quickly became one of the best. His ugly stepfather murdered his beautiful mother because he felt she did not respect him, and Vega killed him in return. The incident warped his mind, and he developed a dual personality: honorable nobleman by day, sadistic murderer by night. It was this incident that triggered Vega's obession with beauty as a wonderful trait, as well as his belief that ugliness is something evil that should be purged.

Vega oversaw assassination operations for Shadaloo, and was associated with Cammy and the Shadaloo assassins known as the Dolls. When Cammy went rogue, Vega was assigned to bring her in, but he failed. Cammy brought herself in and defeated Bison, freeing herself and the other Dolls from Bison's brainwashing. When the strain of undoing the brainwashing (as well as a dead-man's trigger in the brainwashing which was meant to kill them if they betrayed Bison) caused Cammy and the other Dolls to collapse, Vega saved them from the burning Shadaloo base because he didn't believe that anything as beautiful as them should die.

Vega participated in the second World Warrior tournament at the behest of Bison. However, when Bison was seemingly killed by an unknown assailant (Akuma), Vega disappeared back into his old lifestyle.

Vega disappeared, and some even believed that he was dead. However he survived, and was re-recruited by Shadaloo through a subsidiary division called S.I.N.; an offer he quickly accepted for two reasons. First, he had grown tiresome of the aristocratic lifestyle. Second, although he found Seth repugnantly ugly, he was intrigued at the idea of creating new bodies for oneself so as to be eternally young. He returned to his job as Shadaloo assassin, but when Seth was distracted by several assailants, Vega stole valuable data on the project. When Chun-Li did the same thing, he attempted to kill her by setting off the fire alarm, which releases a toxic spray. He escaped in a helicopter from the exploding base and noticed Chun-Li being rescued from the base along with her copy of the data. Mildly displeased that he did not have the only copy, he resolved to correct the situation later.

"I shall never tire of sending unsightly souls to the afterlife."
—Vega

Vega is one of the fastest and most agile characters in the Street Fighter series, but also one of the most delicate; his defensive rating is unusually low compared to most of the other characters to balance his incredible speed. Vega's swiftness and flying special techniques make him well-suited for multi-hitting combination attacks, confusing cross-ups, or long range poking attacks with the reach-advantage provided by his claw. 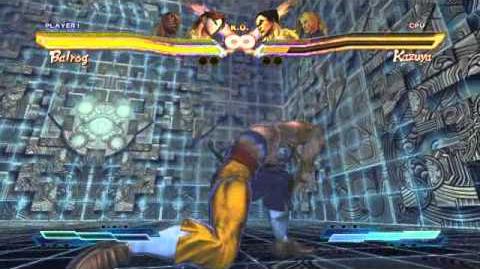