"I'll take on any challenge that you got."
—Steve

Steve Fox is an English boxer in the Tekken series. He made his first appearance in Tekken 4.

A cool, handsome boxer who is currently the reigning middleweight champion of the world. He is a serious and strong-hearted character who hates when others meddle in his matches.

He has slicked back blonde hair that reaches his shoulders. His attire consists of british themed boxing trunks, yellow boxing gloves with studded wristbands, and boxing shoes.

Steve is portrayed as a confidient, strong, and noble person. Whenever Steve has a goal he will do anything to achieve it. This is something he inherits from his mother Nina Williams. However much like Anna, he is also dangerous at times, making him a very powerful fighter, but not evil, and a suprise-attacker.

Adopted in his infancy, Steve never knew the identity of his biological parents or the origin of the scar on his arm. Steve was the world middleweight boxing champion when he is ordered to throw a fight by a Mafia. Steve refused to cooperate and won the fight, regardless of the threats made against him. Unfortunately, the Mafia made good on their threats and put a price on Steve's head. Steve fled the UK for the U.S. to lead the life on the run. But no matter where he hid, he could not completely shake the Mafia henchmen.

Steve realized that no matter what he did, the Mafia would eventually catch up to him and murder him, and he would he ever learn the truth about his past. With this realization, he enters The King of Iron Fist Tournament 4 in hopes of finding out more about his parents and scar. When Heihachi finds out that Steve is in the tournament, he tips off the assassins to his location. Lei Wulong helps Steve find out that the Mishima Zaibatsu created him through vitro-fertilization in Nina Williams. When Steve arrives at the "Union Jack" by limousine, his drivers attempt to assassinate him but are stopped by Nina. Steve attacks the assassins and sees Nina sniping from a nearby building. Nina tries to escape but Steve catches up to her in an alleyway. Nina holds Steve at gun point as Steve recalls Nina's face and realizes who she is, but Lei Wulong comes in, threatening to shoot Nina if she resists. Nina runs away while Steve stops Lei from chasing her.

Two months after the conclusion of the fourth tournament,The King of Iron Fist Tournament 5 was announced. Steve entered the tournament, this time focusing on the destruction of the Mishima Zaibatsu. During the tournament, Steve has a sparring match with Lei Wulong, and then he finds Heihachi believing he was the one in charge of Mishima Zaibatsu, but Heihachi tells Steve that someone else was responsible. Steve finally finds the Zaibatsu lab, and starts destroying it, breaking the lab embryo tanks, and burns the whole building down while walking away satisfied.

Steve was intent on returning to the world of the boxing again, but the majority of major boxing meets are canceled by the war that broke out all over the world. Steve, who knew no other trade than the boxing ring, had effectively lost his job and his passion, and went into depression. Soon after, he received an invitation to train together with Marshall Law and Paul Phoenix. Steve, who liked the idea of training in a martial art other than boxing, accepted.

Because of Steve's fighting style, he is known to be difficult when executing long 'juggling' combos. 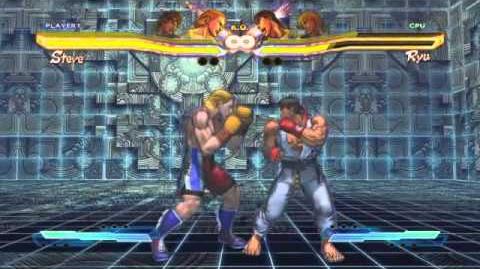 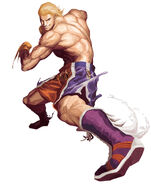 Hwoarang and Steve as seen in their prologue

Hwoarang and Steve's swap costumes, based on Dee Jay and Charlie Nash respectively

Steve Fox on the Tekken Wiki