"After this battle is over, I can continue my journey."
—Ryu

Ryu is the main character & "hero" of the Street Fighter series. Ryu has made an appearance in every Street Fighter game and every crossover fighting game with Capcom characters. Ryu has become a very famous character in the fighting genre, considered the "basic" well rounded character. He is one of Capcom's unofficial "mascot" characters.

A wandering street fighter who trains rigorously in order to become a true martial artist. Studied the art of Ansatsuken from his master Gouken, but does not wield it to take lives. He wishes to test his mettle against fighters around the world in order to find an answer in the heart of battle. He searches for Pandora to see if there is a connection between it and the Satsui no Hado.

Ryu is portrayed as a Japanese man whose basic and most recognizable attire consists of medium-length brown hair, brown eyes, a long, red headband, a white karate gi with the sleeves ripped off at the shoulders, completely bare feet, and a black belt. Ryu's first appearance in the original Street Fighter replaced the red headband with a white one and depicted him with bright red hair, gray eyes, and red slippers. In the Street Fighter Alpha series, Ryu’s hair became a lighter shade of brown, and he retained the white headband. Ryu received his trademark red headband from his best friend Ken after a sparring session.

Ryu is usually a silent, humble, serious individual whose severity is often juxtaposed against the light-hearted, fiery persona of his best friend, Ken. He travels the globe with a stern nature, often appearing to others as boring or detached. On rare occasion, Ryu shows a very bad sense of humor. Ryu's overarching goal in Street Fighter is to become a total master of his fighting style. To this end, Ryu plays the part of the wandering warrior, and takes both his travels and his training very seriously. Although he appears to be aloof and unemotional, Ryu is actually a kind and good-hearted person. However, by the time of Street Fighter III, it seems that Ryu has developed a somewhat more friendly personality. He is still very quiet and reserved, but is willing to greet people with a smile and some kind advice, very much like his master Gouken.

There is, however, a dark side to Ryu. His drive to improve himself, no matter the difficulty, can sometimes develop into a drive to win and to be the best, no matter what the cost, as these two goals are so dangerously similar. This darker drive is fed by, and in turn feeds the Satsui no Hadou within him, an influence which Ryu must constantly fight to suppress (at least until the time of Street Fighter III). Ryu's desire to be better can sometimes make his advice to his defeated opponents seem more arrogant and judgmental than Gouken's, though he is fundamentally well-intentioned. In times when his inner darkness threatens to overcome him, Ryu relies on his friends - primarily Ken, Chun-Li, and Sakura - to keep him grounded and snap him out of it.

As a very young child, Ryu was orphaned and left with no memories about his parents. He was adopted by Gouken who raised Ryu in his secluded dojo and trained Ryu in the ways of his martial arts. Gouken would later train his best friend's spoiled son, Ken Masters. Ken served not only as a sparring partner, but also gave Ryu a friend in the form of a boy his own age. When Ryu was 23 years old, Gouken believed that Ryu was ready to travel the world.

Ryu participanted of the World Warrior tournament. After defeating all challengers, he fought Sagat in the final round. Sagat almost wins before Ryu succumbs to the Satsui no Hadou and he strikes Sagat with a nearly-fatal Metsu Shoryuken that scars Sagat's chest.

Ryu leaves Sagat behind and returns to his home only to find that Gouken, his master and adoptive father, has apparently been murdered. Learning that Akuma had fought and supposedly killed his adopted father, Ryu began to travel the world to find this man.

He encounters and fights Akuma on a secluded island known as Gokuentou, but Akuma was only testing him. He senses that Ryu has the same powers as he does, and tells Ryu about the Satsui no Hadou - a power that consumes the practitioners of their shared fighting style, driving them to win even when it means killing the opponent. Akuma then uses his fist to smash the island, leaving Ryu stranded.

Sometime after escaping the island, Ryu battles Ken and loses. Ken realizes Ryu is not himself and has been deeply troubled since his last victory over Sagat. He gives him his red hairband as a reminder to stay focused, which Ryu was sincerely grateful for. Soon thereafter, a fan of his, named Sakura, comes up and expresses her desire to train under him. Ryu replies that he himself still has much to learn, but allows Sakura to take a picture of him. She swears to make him accept her eventually.

At some point during all this, Ryu is found by Sagat who is out for a grudge match. Ryu protests that Sagat hasn't fully recovered from their last bout, but Sagat persists. Ryu lets Sagat win rather than do any further damage, and Sagat leaves. Only later, upon reflection, does Sagat realize that Ryu held back, vowing to fight him again.

Two years later, Ryu continues to be troubled by what Akuma had told him, compounded by his encounter with Rose, who has intricate ties to M. Bison. She tells him that he cannot defeat Bison unless he fights him at the cost of his soul. True to form, when Ryu confronts Bison, he is defeated despite putting up a valiant fight. Bison takes the semi-conscious Ryu and begins brainwashing him, using the revelation that the Satsui no Hadou - the dark power Ryu struggles to avoid using - is akin to Bison's own Psycho Power.

This scene is interrupted by the entrance of Sagat, Ken, and Sakura, each of them having followed Ryu for their own reasons. While Ken and Sakura distract Bison, Sagat challenges the brainwashed Ryu (different versions of this story coexist; in one version, Sagat is offered this battle as an enticement to stay with Shadaloo). Sagat quickly notices the effects Bison's brainwashing have had on Ryu, and, at Sagat's urging, Ryu comes to his senses to confront and defeats Bison, destroying him temporarily.

During the World Warrior tournament, Ryu enters to test his skills, and defeats many of the new warriors. He encourages Ken to re-enter as well. However, it is unknown how far Ryu himself progressed in the tournament, although it is implied he may have lost to Ken.

Sometime after the second World Warrior tournament, Ryu enters into a new tournament to further master his skills as well as reunite with his longtime friend Ken for another rematch. During his journey he meets up with Sakura whom he encourages to train harder. Meanwhile Ryu also meets up with a former rival Sagat and remembers the promised rematch as they fought. During the final round with the Tournament Host Seth (actually a copy of him), he defeats him in the S.I.N. headquarters. During and after this battle the building fell around them as Ryu unleashed the Satsui no Hadou on the BLECE machine, a weapon of mass destruction developed by S.I.N. that harnessed the energy in the human body.

During this, Sakura - who has been searching for Ryu - finds him and the BLECE machine, and a pulse of energy from it knocks her into a wall. Ryu defends her by unleashing a Shoryuken on the machine, and they leave the building together, the weapon destroyed.

He then encounters Gouken, who has in fact survived his last battle with Akuma, and Gouken uses the "Power of Nothingness" to seal the Satsui no Hadou which is eating at Ryu, knocking him unconscious. Akuma then arrives on the scene to challenge his brother for a death duel, the winner of which will claim "the cub" (meaning Ryu). The outcome of the duel is unknown but, since Ryu is later seen free of Dark Hadou's influence, it is very likely that either Gouken won or the battle ended in a draw (possibly interrupted).

Later, Ryu and Ken chase their long-lost master along a cliff face, with Ken wanting Gouken to stick around while Ryu wishes him well. Afterwards, he and Ken trek through the desert while Rufus mocks them on his motorcycle, though it later breaks down and he is left pushing it while Ryu and Ken finally reach Ken's jeep. Ryu later bids Sakura farewell as she, Dan and Blanka leave for home on a cruise ship. Some time later, having decided that his battles have made him stronger, he meets a now-older Sakura. What happens next is unknown, although Gouken might have taught Ryu Shin Shoryuken and Denjin Hadouken at some point before Street Fighter III.

Years later, Ryu enters the third World Warrior tournament to further advance his fighting abilities. His most notable fight during the tournament is against Hugo, who is able to withstand his Shin Shoryuken and hold his own. Though disputed if canon or not, he is defeated by Oro, and continues his travels afterward.

Shortly after the tournament, Ryu meets up with Ken for a friendly match, from which Ryu emerges the victor(canon in question). He also serves as Hugo's pro-wrestling tag-team partner for a brief period of time before moving on.

At some point, he encounters Alex, whom he solidly defeats. Ryu encourages the young wrestler to continue honing his abilities against strong opponents. Fascinated by Ryu's skill and determined to become stronger, Alex soon sets out to find Ryu for a rematch. Though disputed if canon or not, Oro eventually finds Ryu and begins aiding the young warrior in his training, though Ryu is never aware of the hermit's presence.

"Now I'm getting the hang of things!"
—Ryu

Ryu's primary moveset is the Hadoken; overcharging the Hadoken sets the opponents on fire. His Tatsumaki Senpuukyaku allows him to dodge projectiles at the start of the spin, but is comparatively weaker than that of Ken's, as Ryu can only hit an opponent once using the move. However, using the EX Combo move allows Ryu to execute a stationary but powerful Tatsumaki Senpuukyaku, hitting the opponent five times; the same principle also applies to his Shoryuken move. Although Ryu and Ken share the same moveset, the kick moves and Shoryuken executed by Ryu are comparatively weaker to Ken's, although Ryu's Hadoken is more powerful than that of Ken's. 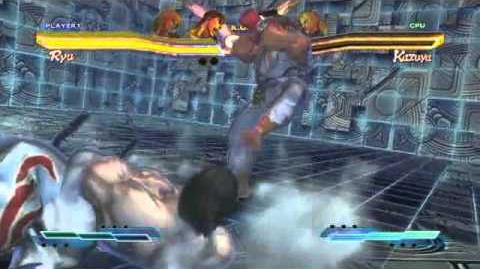 Ryu during his pre-fight intro