Poison is infamous because of the uncertainty regarding her gender, as there has been constant debate whether she is technically male or female on several fronts.

A former member of the Mad Gear crime syndicate. She is constantly at odds with her partner Hugo, although the two seem to get along just fine regardless.

Poison is a woman with long, pink, somewhat rugged, hair. She wears a black cap, a choker, blue cutoff shorts, red high heels, and a tanktop cut just below her large breasts. In Final Fight Revenge and some artworks, her hair is shown to be purple instead of pink. She wears several armbands around her right arm and has chains and a pair of handcuffs suspended off her shorts. Final Fight Revenge features her also possessing a whip used in attacks, though the character has not been shown with one in other titles or artwork. Poison stands about 5 feet 9 inches (175 cm) tall and has three sizes of 34-25-35" (88-66-89 cm).

Poison's behavior is represented as womanly and sultry, ranging from flirtatious comments to pole dancing. She is also rather promiscuous, as this is displayed in combat and after defeating an opponent. She enjoys fighting and uses it as a means to stay in shape. Aside from this, Poison is very smart about fighting and does not like to fight children.

Poison was a member of the Mad Gear gang when they kidnapped mayor Haggar's daughter Jessica. Though the females within the Mad Gear Gang are very few in number, they are considered to rank among the most insidious members. As the head of this small but elite group of femme fatales, Poison helped fight against Haggar, Cody and Guy, but left the gang when they disbanded.

After Cody Travers was arrested and put in jail, Poison visited him in prison to express her feelings for him. Poison realized that Cody would never return his feelings as his heart still belonged to Jessica.

She started to be Hugo's manager during her time in pro wrestling. Eventually, Hugo and Poison decided to start their own wrestling promotion, the Huge/Hyu Wrestling Army (HWA). Their main objective is to take over all of pro wrestling.

"It's a little too early for you to be on your back already."
—Poison

Poison's fighting style consists of acrobatic flips, grabs, slaps, violent whip attacks and dirty tactics. Her gameplay in SFxTK is mostly based on her footsies and zoning, and she can mix-up her opponent fairly well.

Poison also has two unique attacks. The first being an elbow drop, where it hits overhead and can be comboed into. The second is a backflip that goes back pretty far and can be used to evade attacks or to get out of a bad situation.

Poison's first appearance in Final Fight featured her and a palette swap character named Roxy as recurring minor enemies for the player to fight. Named after the band by an unnamed female employee at Capcom, she was designed by Akira Yasuda to contrast against the bigger characters in the game and move about randomly. According to the book All About Capcom Head to Head Fighting Games, the characters were originally planned to be cisgender women, but it was believed they were changed to transgender women due to the suggestion that "hitting women was considered rude" in America and the concern that feminist groups would sue. However, Poison's original concept artwork already referred to her as a "newhalf", meaning that she was never intended to be cis.

A later appearance by Poison as playable character in Final Fight Revenge, an American-produced 3D fighting game spinoff of Final Fight, portrayed the character in a highly feminine manner and had her romantically interested in Final Fight hero Cody. Commentary about her ending in the game in All About Capcom suggested that the character may have received a sex change. The Final Fight-related character profiles featured in the 2005 compilation Capcom Classics Collection acknowledges Poison's transgender characterization.

The discrepancy regarding Poison has been addressed more than once in interviews with former and current Capcom employees. Final Fight developer and founder Akira Nishitani stated he supposed the character could be male but added it was up to the viewer to decide. Street Fighter IV's producer Yoshinori Ono, when asked in an interview about the matter, stated "Let's set the record straight: in North America, Poison is officially a post-op transsexual. But in Japan, he simply tucks his business away to look female." He later emphasized it again when asked about what female characters could be included in the game Street Fighter IV, stating that it would be too confusing to include her due to the region-specific gender. 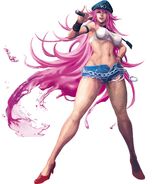 Poison during her pre-fight introduction

Poison in her and Hugo's reveal trailer pic 1

Poison as seen in her and Hugo's reveal trailer pic 2