"So begins the slaughter."
—Ogre

Ogre (who also goes by the name Toshin in Japanese and is known as The God of Fighting by the ancient Aztecs or Ancient Ogre), is the main villain of Tekken 3 and a secondary villain in Tekken 5. He is the Tekken series' first main villain who is not a member of the Mishima family.

Ogre's first form resembles a tall, muscular humanoid with dark green skin. He wears various types of Aztec jewelry and a large golden helmet/headdress with long purple hair. He also has a small round shield attached to his left arm.

Although Ogre appears to be a wild beast, he is actually a sentient being. Very little information is given on the character's personality or his story, but what it does describe says that Ogre "understands entire structures of all living and artificial beings, and absorbs them" (possibly to grow in strength). In his first form, Ogre is capable of speech (as seen in his winning animations), but speaks in an unknown alien language. In Tekken Tag Tournament 2 (as True Ogre), it was revealed that he is shown to have a cannibal instinct.

Ogre is a war weapon left on earth by aliens in ancient times. It is unknown if Ogre is one of their species or simply a living weapon. He was sleeping in a temple in Mexico when he was awaken by Heihachi's Tekken Force, and destroyed them all. Ogre attacked many world-renowned martial arts masters around the world and absorbed their ki and abilities into his own being. Ogre eventually makes his way towards Yakushima, where Jun and Jin Kazama live. Ogre finds them and attacks, knocking out Jin who later awakes to find his home destroyed and Ogre and Jun nowhere to be found.

As bait to lure Ogre into the open, Heihachi announces the King of Iron Fist Tournament 3 five years later. Ogre shows up and is defeated by Paul Phoenix. However, Ogre morphs into its true form and the tournament continues. Ogre eventually confronts Jin and they clash in battle. Jin emerges victorious and Ogre is defeated.

After Jin leaves the Hon-Maru after the final battle in the King of Iron Fist Tournament 4, he hears rumours that his mother is still alive at G Corporation. When Jin travels to their labs, he finds no trace of his mother, but instead discovers Ogre there. In the ruins of an ancient temple beneath the labs, Jin battles Ogre once again. Ogre flees to a deeper part of the ruins with Jin in hot pursuit. In the deeper ruins, Jin encounters a giant contraption that uses a large white orb to attack. After Jin destroys this, it is revealed that he has unwittingly broken the seal containing Ogre. Jin battles True Ogre once again, but when he wins it reveals yet another transformation. Despite its new advantages, Jin still triumphs, and destroys Ogre once and for all.

It is still debated whether the events in Devil Within are canon or not but it is generaly assumed not. 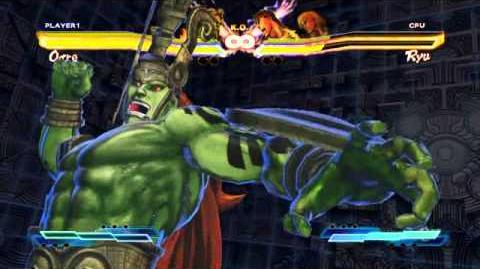 Ogre in his reveal trailer

Ogre on the Tekken Wiki