Nina Williams is a character from the Tekken game series. She is a cold-blooded assassin who made her first appearance in the original Tekken and has appeared in every Tekken game since. She is one of only four Tekken characters to appear in each game and the only female character to have appeared in every installment. She has a notable love/hate relationship with her younger sister, Anna Williams.

A professional assassin, who works without choosing her clientele. She is a cool-headed and callous individual who does not let anyone get in the way of her job. In the past, she failed to assassinate Kazuya Mishima.

Nina has long blonde hair and crystal-blue eyes. Her look contrasts from that of her sister, Anna, who is a brunette. Her trademark costume is the purple "catsuit", as she has worn many different designs of catsuit in both Tekken and Death by Degrees, which are made of materials resembling spandex, PVC and leather. She wears her hair tied into a ponytail or a braid. Her skin is ivory-colored and she has an hourglass shape.

Nina is generally portrayed as emotionless, stoic, and focused. She does not smile often, as opposed to her more frivolous sister, but Nina does display a sense of humor where tormenting Anna is concerned. Nina is somewhat antisocial, and also appears to be in great psychological turbulence. When it comes to clients, Nina isn't picky about them. She is willing to take their contracts without hesitation.

Nina was born and raised in Ireland with her sister, Anna Williams. A sibling rivalry boiled between the two, as girls adored their father, Richard Williams, and often battled for his attention. Nina acquired her unusual combination of skills from her parents. Her father, once an assassin for the IRA, left Ireland to escape his past. His marriage to a British Aikido champion created a bloodline that would spawn a child with incredible talent and a killer instinct.

Nina was kidnapped by an underground force and drugged into believing that the Rave War sponsor must be assassinated. Nina then entered the King of Iron Fist Tournament to assassinate Heihachi Mishima, but Kazuya finished off Heihachi at the end of the tournament.

Tragedy struck when Richard Williams was murdered. Both Nina and Anna blame each other for the murder, but the exact nature of Richard's death has never been disclosed. Since the murder, their rivalry has slowly become more of a bitter hatred. Nina was contracted to kill Kazuya Mishima during the second King of the Iron Fist tournament, but conflict with her sister prevented her from fulfilling the assignment. She was captured by Mishima after failing to assassinate him and was used as a test subject in the "cold sleep" project (cryogenic sleep). Anna volunteered and also was put in cryogenic sleep.

They did not wake up for 15 years. Heihachi's private corps, the Tekken Forces, went to the burial site and excavated Ogre. This unearthing unleashed its spirit, which awakened Nina's resting soul. She fought through the 3rd King of the Iron Fist Tournament while suffering from cryosleep-induced amnesia. Now controlled by Ogre, Nina acts robotically, with the command to assassinate Jin Kazama....but Jin Kazama saved her. Anna tried to bring Nina's memories back, but Nina instead left without telling her sister.

Nina returned to life as an assassin, as it was the only thing that she recalled from her previous life. Nina received a new contract from a Mafia organization to assassinate Steve Fox, a boxing world champion. Nina discovered that Fox was a participant in the King of Iron Fist Tournament 4, and set her sights on completing her new mission by infiltrated the Tournament. After the Tournament, Nina pursued her Steve to his hotel in order to complete her objective. While preparing for the hit, Nina received additional information on the target from the Syndicate that revealed that Nina was in fact Steve's mother, who was created through in-vitro fertilization without Nina's knowledge. Nina is ready to assassinate Steve (via sniper rifle), but could not bring herself to murder her only child. Lei Wulong then arrived to try to kill Nina. She quickly escapes through the window and ran across the street running into Steve. When Lei fired at Nina again, Steve pushed Nina out of the way, saving her life, and Nina thanked him before escaping.

The Syndicate that Nina worked for fell, so Nina decided to meet her sister Anna to recover her past, but as soon as Nina saw Anna, her memories rushed back to her, and their rivalry continued. After fighting for days, they decided to settle their rivalry in the King Of Iron Fist Tournament 5. Nina finally settled the score by defeating her younger sister. After being inspired by their sibling battle, a movie director insists on starring them in an upcoming film.

Jin Kazama hired Nina to be his personal bodyguard. She later became his confidante in assisting his Tekken Force in taking over the world. With strong tension between the Mishima Zaibatsu and G Corporation, the King of the Iron Fist Tournament 6 was announced. Nina enters the tournament to remove any threat to Jin's life.

Nina is one of the two characters in the game besides King to feature command chain grabs. (Anna and Bruce Irvin are the other two Tekken characters with chain grabs but do not appear in SFxT.) 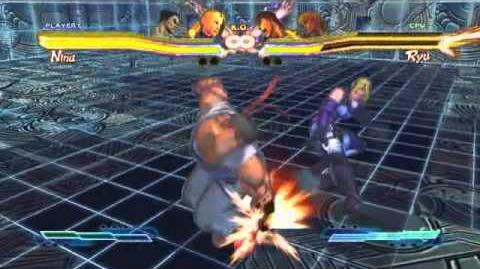 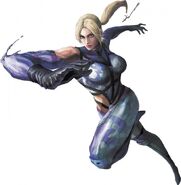 Kazuya and Nina prepare for battle

Nina Williams at the Tekken Wiki