Marshall Law is a character from the Tekken series. He was first introduced in the original Tekken, and is known as "The Fighting Chef".

Law is Namco's tribute to the real life legendary martial arts master Bruce Lee but Law sports a thin, long mustache. He often wears the iconic Kung Fu black pants and sash Lee was famous for wearing, and they are sometimes decorated with dragon art along the side.

He is a good dude, transparance charm and have a well taste/desire for money, which is visible in his words. He has the iconic fighting style 'Jeet Kune Do' as portrayed by the late legend Bruce Lee.

Law's students were attacked and severely injured by a taekwondo teacher who is participating in the next tournament. Law decides to enter the tournament to avenge his students and to restore the reputation of his gym. The villain that attacked Law's dojo turned out to be Baek Doo San, another martial arts master with a competing dojo. Law defeated him in the tournament. It turns out that Baek has disappeared along with most of the martial artists from the second tournament, but Law feels pretty safe going on the business trip he had planned.

Marshall Law was a successful businessman - he managed a newly established dojo and even owned a nationwide Chinese restaurant chain called Marshall China. Unfortunately, he lost a franchise war against a competitor and had to declare bankruptcy a year later. Unable to deal with his failure, Marshall fell into depression and spent his days at home in a drunken haze. Then one day, a notice for the Tournament arrived at his doorstep. After a month of intense training, he beat himself back into top physical form.

Marshall did not have enough money to return to America and stayed in Japan as a dishwasher, a month later he had a call from his wife. His son Forest was riding on Paul Phoenix's bike and caused an awful accident. With his son' accident and the money he need to head home, Marshall decides to win and enter the King of Iron Fist Tournament 5. However, during the middle of the King of Iron Fist Tournament 5, it was discovered that Marshall Law was working illegally in Japan, and as a result he was immediately deported to his home country of the United States of America.

With the deadline to pay for the damages of his son’s accident fast approaching, hopes of getting the money needed were slim. His best friend Paul Phoenix approached him with the idea of forming a team, securing a high-ranking prize alone would certainly be difficult, but if he was part of a team, the probability of winning would be much higher. Marshall accepted Paul’s invite, but thinking a three-man team was better than a two-man team, the renowned boxer Steve Fox caught his attention. 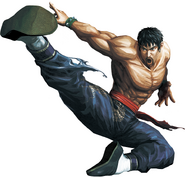 Law's restaurant as seen in Zangief and Rufus' reveal trailer

Law's page on the Tekken Wiki