"You haven't even sprouted whiskers yet! Come back in a couple of years."
—King

King is is a title that two characters have taken in the Tekken series. Even though there have been two characters who have taken the name, each is simply called King in their respective games, though a numerical value is sometimes given to them to separate them as different characters.

Both King I and King II are luchadores from Mexico and support orphans across the world. In the games, they are never seen without their jaguar masks. King (albeit technically as two separate characters) has appeared in all main Tekken games, making him one of the most recognizable characters in the series.

A pro wrestler who wears a Jaguar mask to the ring. King swore revenge against Armor King's foe, Marduk, but eventually reconciled with his foe. He is a silent and serious fighter.

King wears a jaguar mask that totally hide his head in matches.

Although King does not speak in words, he makes growls and snarls in the manner of a jaguar, which are translated into English subtitles at the bottom of the screen. Interestingly, other characters do not have a problem understanding King, and converse with him as though he was speaking naturally. King is also very kind and has a lot of respect for fellow fighters and other people.

King was a street urchin, brought up in a Mexican orphanage owned by the original King. He worked with King until one day, news broke of the first King's death at the hands of the monstrous creature known as Ogre. With no money, the orphanage would crumble into nothing, so he donned King’s mask and imitated his style, but he lost every competition he entered. One day, another masked man visited the new King, introducing himself as an old friend. He revealed himself to be Armor King, and offered to train the new King out of respect for his friend. After four years, he matured into a forceful wrestler known as King II, a worthy heir to the throne.

After hearing news of The King of Iron Fist Tournament 3, King II was entered into the tournament by his mentor to see how well his training would pay off against the toughest of competitors world-wide. King also seeked revenge against the elusive Ogre. King began a successful career as a luchadore after the tournament, but he and Armor King still missed their friend.

King discovered that his master, Armor King, had been killed in a bar fight. The perpetrator, Craig Marduk, had been arrested in Arizona and was sent to prison. Upon Marduk's release (thanks to bribes paid by King himself), King sent a letter challenging Marduk to the tournament. King defeated Marduk and sent him to the hospital, where King followed him to deliver a deadly blow. However, he stopped after seeing a portrait of Marduk and his elderly parents. King puts the portrait on Marduk's chest, and leaves, realizing how foolish he had become.

Marduk donned a black jaguar mask and challenged King to a rematch via television. Enraged by the assault on his master's honor, King resolved to settle the score in The King of Iron Fist Tournament 5.

King met Julia Chang along the way, who asked King to stop fighting just because Marduk called him out. When King refused, Julia tried to stop King on her own, but King was the victor in their match. After two more rounds, he had the chance to fight Marduk, who adamantly said he would beat King "fair and square". Once again however, King won. Marduk conceded defeat and King offered his hand in friendship, reconciling differences between the two. King and Marduk later went on to become NWN Tag Team Champions.

King heard of the attack on Marduk, and was furious to learn that the assailant looked exactly like his deceased master, Armor King. King was unsuccessful in his attempt to learn the true identity of Craig's attacker when he received an invitation from Marduk to join him in The King of Iron Fist Tournament 6, in the hopes that the culprit would appear again. When King was in his room looking at a picture of his deceased master, he accidentally dropped and broke the glass frame and noticed another photo behind his master's; the hidden photo that showed two Armor Kings.

"That was a great fight! Next time, jump in the ring with me!"
—King

King and Marduk prepare for battle

King and Marduk's swap costumes, based off Alex and Hugo respectively 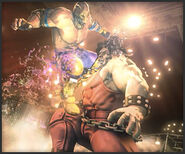 King and Abel, leaping to catch up

King on the Tekken Wiki