"If you don't take this seriously, you're gonna get hurt!"
—Ken

Trained with Ryu under the tutelage of Gouken, and has since become eternal rivals with his good friend. He is the heir to the Masters Corporation.

Ken is most easily recognized by his sparring gloves and bright red karate gi with the arms ripped off, similar to Ryu's. His gi is usually seen in better shape than Ryu's, since he can easily afford to keep up with and/or own spares. He has long, blond hair and long eyebrows. He wears a black belt at his waist and fights barefooted.

While Ryu is the serious, nice, and stoic of the two, Ken is the complete opposite. He's flashy, unorthodox, and unpredictable. He can also be arrogant and short tempered at times, but he is actually a good guy and very easy going. He never backs down from a fight no matter how difficult it looks. He always gives his opponents a fair fight and the utmost respect. He also a worries about his family; he nearly didn't enter the tournament in Street Fighter IV because he didn't want to leave Eliza so close to her due date, and only entered when she assured him she'd be fine.

When Ken was about 12 years old, his father, a rich hotel tycoon, thought that his son needed to learn about discipline, or his son will become a spoiled brat all of his life and try to leech onto the Masters' family fortune. In order to do so, the elder Masters sent Ken to Japan to train under his best friend, the mysterious karate master Gouken. At first, Ken was very hesitant to learn from Gouken, wanting to go back to the United States, but later began to respect his master. He even enjoyed the company of Gouken's adopted son, Ryu, since he had a foil to finally pull pranks on, although this got Ken into a lot of trouble. Ryu and Ken would later become best friends and each others principal rivals.

When Ryu was 23, Gouken decided that both of his pupils had grown up to be fine fighters and decided that their training was over and could now leave the dojo. Ryu decided to travel the world in order to continue his training, whereas Ken was finally happy to be going back home to the United States after his years of straining his back for master Gouken and finally learning the meaning of humility. After coming home, Ken competed in many different Martial Arts tournaments held in the United States, winning most of them.

Ken did not participate in the first Street Fighter tournament; instead, he fought in (and won) the premiere U.S. Martial Arts tournament that had been previously won by Charlie, as well as meeting a very attractive girl named Eliza, who became his girlfriend. After winning the U.S. martial arts tournament, Ken returned to his training ground to tell his master Gouken the good news. There he witnessed his master's death at the hands of Akuma. Enraged and grief stricken, he attacked Akuma, only to be knocked to the ground by a single blow from Akuma.

He began wandering the world in search of Akuma, and his friend and fellow student Ryu. He wanted to tell Ryu what happened to their master and also hoped to win a match against him. He eventually finds Ryu in seclusion. Ryu is dejected upon seeing his long-time friend, but Ken makes him go try out a spar anyway. After winning, Ken realizes how stressed out his best friend is since his fight with Sagat. Ryu explains to Ken that deep within him there is a burning rage, a power trying to overcome him. Giving Ryu his red headband, Ken tells him to stay focused, which cheers Ryu up. Ken returns home and begins training harder. Knowing even with his recent feelings, that Ryu is always stronger than he looks.

Ken begins to wonder about his own life. Ryu seemed to be on the right track again, but what of him? Along the way to prove himself again, he encounters Karin who tells him she has followed his career and is trying to best her rival Sakura to prove she is superior. Ken advises her it's good to have a rival, but not for supremacy, but to keep on training harder and focusing. With this, Ken finds himself again and is focused once more. Going off to meet up with Sakura, they too have a friendly match and Ken finally realizes that Ryu has the right idea all along. Both he and Sakura begin to travel to find Ryu, but find out that he's being brainwashed by the dictator M. Bison. Ken and Sakura both take Bison on together to distract him as Sagat (who had come along to also find Ryu struggling against Bison) trying to take Ryu under control. Ryu eventually came to his senses and broke free of his Psycho Power with his own Satsui no Hadou and battled Bison, forcing him to retreat. Ryu asked Ken to wait for his rematch, knowing he still had much to learn. Ken himself promised to train harder.

Ken received an invitation to the second Street Fighter tournament but since his last U.S. Martial Arts tournament, he had let himself spend too much time with his girlfriend, Eliza, rather than training. Only Ryu's personal challenge rekindled Ken's fighting spirit and persuaded him to enter the second World Warrior tournament. After the events of Street Fighter II, Ken is married to Eliza, something he vowed only to do after winning a decisive victory against Ryu. However it is unknown if the two fought during the tournament, although it is implied that Ken won the fight.

When a new tournament is announced, Ken is unsure whether to compete, as Eliza is now heavily pregnant and he doesn't want to leave her. Sensing his inner conflict, Eliza assures him that she'll be fine and that the baby isn't due for a while yet, so he should go meet up with Ryu and tell him she says hi. Ken enters, and in the absence of gas stations near the location for the final, he parks his SUV in a convenient spot, calls Eliza to check on her, and continues the rest of the way on foot. Over the course of the tournament, he encounters his self-appointed rival, Rufus, although the results of that match are unknown.  After the tournament, it is discovered that Gouken is still alive and Ken and Ryu pursue him as he leaves. Ken is upset that Gouken has not said anything to them, but Gouken counters that they no longer need a master. Ken and Ryu head home on foot, and Rufus passes them by on his motorbike, calling them losers. Soon however, Rufus' bike runs out of gas and Ken and Ryu reach the SUV. Ken offers Rufus and Candy a lift, but Rufus refuses. Upon arriving home afterwards, he tells Eliza that although he did indeed get to fight Ryu, they had been so busy with the rest of the unfolding events that they hadn't been able to give it their all. Soon after-wards, their son is born and they name him Mel.

A few years later, Ken then entered the third Street Fighter tournament. By this time, a Brazilian teenager named Sean had been pestering him to become his student, and Ken reluctantly accepted, beginning to train him. He fought Sean and won against him in the tournament; however, during the course of it, Ken drops out when realizing Ryu was defeated by Oro. Ken begins to train his son Mel in rudimentary fighting techniques. He also told Sean to go find Ryu and challenge him, giving him some free time with Eliza.

Though bored, Ken hears about a mysterious organization and goes to investigate, and may have confronted Urien. He does win his third straight U.S. Martial Arts tournament victory, which is a new record, and offers the trophy to Sean, although his student says he wishes to earn it for himself. He also learned that Ryu had sought him out and traveled all the way to New York from Oakland for their long-awaited rematch. Tossing some friendly jabs at each other, both have a good fight. Since then, Ken has continued to train Sean and Mel, handle his family and business, and keep up with his old friend.

"Your fundamentals are all over the place! You need to go back to the training room."
—Ken

Ken mainly focuses on the Shoryuken move, to the point where his Shoryukens set the opponent on fire. Ken's Tatsumaki Senpuukyaku does not allow him to dodge projectiles at the start of the spin, but spins faster, allows him to hit his opponent up to five times. Ken's Hadouken attacks are less concentrated than Ryu's, but Ken's Shoryuken is more powerful. 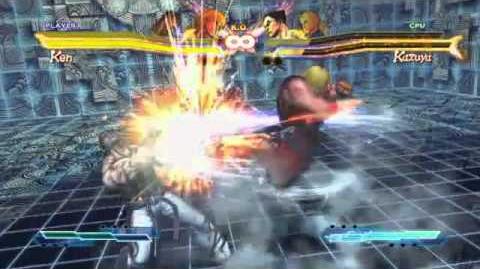 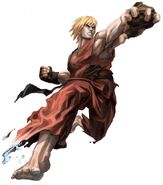 Ryu and Ken prepare for battle