"How interesting. I'll happily take you on."
—Kazuya

Kazuya Mishima is one of the main characters in the Tekken fighting game series. Appearing originally as the main protagonist and the heroic character of the first Tekken game, he would become one of the most evil characters later in the series along with the demonic and powerful entity known as Devil.

A cold-blooded killer who has awakened the power of the devil. Supporting the G Corporation from behind the scenes, he works in secret to reacquire the Mishima Zaibatsu. An arrogant and brutal man, he has fought countless times against his father, Heihachi, and his son, Jin.

Kazuya's clothing of choice, simple white pants, and red gloves and footpads, and his hair pulled back. His left eye glows bright red (due to the Devil Gene in his body), and he has several scars across his body, including a large scar that goes diagonally across his chest.

Because Kazuya sold his soul to the Devil years ago after, after destroying his father (or so he thought), Kazuya repeated the corrupt practices of his father and turned the Mishima Zaibatsu into an even more ruthless organization, absolutely without conscience or remorse for his actions. He hired assassins to eliminate any of his critics & rivals, he attempted to extort money from several businesses & organizations, and he even smuggled endangered species and conducted genetic experiments on them.

Kazuya still had goodness within his heart, which constantly battled his dark side, though this would turn out to be his downfall after merging with his Devil Gene. He is a ruthless, heartless, cold-blooded person with no sense of honor in or outside of a fight and he has a lust for power that has no limits. Kazuya will destroy anyone or anything who attempts to get in his way in his quest for world conquest and power.

Kazuya Mishima is the son of Heihachi Mishima, the long-time Chief Executive Officer of the Mishima Zaibatsu: a powerful worldwide conglomerate and its various subsidiaries. When Kazuya was a five-year-old child, he was thrown off of a cliff by his father, who claimed that his son was weak. If Kazuya was to be his father's successor to the Mishima Zaibatsu throne, he was to not only survive the fall, but climb back up the rocky cliff as well. Kazuya barely survived the fall, and made a deal with the devil in order to survive it and to gain any form if he was killed; all this was for the goal of killing Heihachi. Kazuya entered martial arts tournaments all over the world, becoming an undefeated champion. When the first King of Iron Fist Tournament was announced, Kazuya took the opportunity for vengeance.

Kazuya enters the tournament and makes it to the final against Heihachi. Apathetic towards the tournament's considerable prize money, Kazuya engages his father in a vicious, bloody battle in which Kazuya emerges victorious. Kazuya then proceeds to throw Heihachi's broken body off the same cliff Heihachi threw Kazuya off many years ago.

Two years later, Kazuya has been the Mishima Zaibatsu's CEO and engaged in much more sinister actions than Heihachi ever did. Kazuya hears news that Heihachi is alive and coming for him, so Kazuya announces the King of Iron Fist Tournament 2 in order to lure his enemies out. During the tournament, Kazuya encounters a contender, Jun Kazama, and impregnates her, leaving her and his son. Heihachi makes it to the final round to face Kazuya and defeats him. As a last resort, Kazuya transforms into his Devil form, but Heihachi still emerges victorious due to his training, Heihachi throws Kazuya's body into the mouth of a volcano and escapes on a helicopter as the volcano erupts.

Kazuya was revived by the G Corporation, a rival genetics company of the Mishima Zaibatsu, allowing the scientists there to study his body in hopes of learning to control his Devil Gene. Heihachi discovered that Kazuya's remains had been taken by G Corporation and sent in his Tekken Force soldiers to seize their data. They found Kazuya, who single-handedly defeated the entire squad and swore to revenge, and to reclaim his Devil Gene from his son, Jin. In response, Heihachi announced the 4th tournament so that he could obtain Kazuya's Devil Gene. Kazuya knew the tournament was a trap, but he entered regardless. During the tournament, Kazuya was about to fight Jin when Heihachi's Tekken Forces subdued and kidnapped Jin so that Heihachi could extract the Devil Gene from him. The tournament officials announced Kazuya as the default winner of Round 7, and that he automatically qualified for the final round against Heihachi.

Kazuya knew Heihachi was behind Jin's disappearance and demanded to know his whereabouts, but Heihachi would only tell Kazuya after their match. After Kazuya won, Heihachi escorted him to Hon-Maru Jin was tied high up to a wall. The devil within Kazuya started to surface, as Kazuya (as the Devil) explained to Heihachi that he lost half of himself to Jin when he was thrown into the volcano by Heihachi and wants to reclaim it from Jin. The Devil tried to absorb the other half from Jin but failed. Kazuya then fought with the Devil over control of his body and had fused Devil's power with his own. He still needed to destroy Jin to obtain his Devil Gene, but Jin defeated him but did not kill him. When he came to, he and Heihachi were attacked by JACKs. They fought together for a while until Kazuya transformed into his Devil form and left Heihachi to die alone.

When a mysterious man takes over the Mishima Zaibatsu and announces the King of Iron Fist Tournament 5, Kazuya enters to track down those who betrayed him and discover the sponsor's identity. During the tournament, Kazuya crosses paths with his adoptive half-brother, Lee Chaolan, who he defeats, but and did not want to waste his time destroying him, and later Heihachi, who survived the Jack-4 attack. Heihachi accuses Kazuya of sending the Jack-4s to kill him, but Kazuya denies it, and it is during this conversation that Kazuya finally learns who is holding the tournament: his grandfather, Jinpachi Mishima.

Despite not winning the fifth tournament, Kazuya discovered the division of G Corporation that tried to kill him (fearing he may become a threat to the world) and destroying them all in order to take over the world, becoming the head of the company and using it as the only powerful opposition to the Mishima Zaibatsu, led by Jin, who had begun world conquest and declared war on the world.

By this time, the world's population sees G Corporation as its only savior, though Kazuya plans to kill Jin and take over the world himself, and Kazuya uses the company's influence to his advantage: to stop Jin from taking over his plans for world domination and to rule all life on the planet, Kazuya places a bounty on Jin's head for whoever could manage to capture him dead or alive and decides to enter the King of Iron Fist Tournament 6 (announced by Jin) to settle the score once and for all with his son. Kazuya along with the G Coporation arrives at a remote area somewhere in the desert and he feels an overwhelming power within a large corridor/temple and is soon confronted by an entity named Azazel who is believed to be the reason for the Devil Gene but they are interrupted by the arrival of Jin who has also felt this power and believes that he must win this battle to save the world and destroy the Mishima curse or bloodline, but he believes to achieve this Kazuya, Azazel, and himself must all die. But later encounters Lars he later finds out that he is his half-brother, but it ended in a draw when Kazuya escapes. 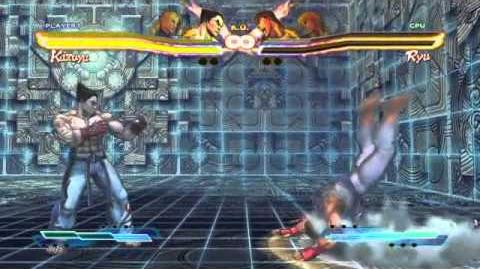 Kazuya and Nina prepare for battle

Kazuya and Nina's swap costumes, based on Guile and Rolento respectively

Kazuya's page on the Tekken Wiki