Julia Chang is a character in the Tekken series who debuted in Tekken 3. Since then, Julia has appeared in all subsequent games up to Tekken Tag Tournament 2, in which she appears as her alter-ego Jaycee. Julia has since replicated the style of her foster mother Michelle (part of the cast of Tekken 1) and stood in her in the Tekken series.

As a young child, Julia discovered the ruins of an ancient civilization. Now, this nature-loving woman fights for what she believes in. A beautiful, intelligent woman, Julia always approaches every situation with careful judgment.

Julia Chang is a young and beautiful Native American woman with brown eyes and waist-length brown hair, braided down the back and with a long fringe parted to each side of her face. Julia is often seen wearing a Native American headdress with two feathers tucked into the left-hand side.

She wears a dark brown short midriff to match her green midriff, dark denim skirt with white ripped designs at the edge, her socks reach up to just below her knees and her brown cowboy boots are decorated with dark brown patterns. Her armband is black with white designs, her Native American headdress is purple and cyan and has a black necklace bearing a round blue pendant and a gray winged design in each sides.

Julia is a strong, respectful, and noble fighter, she is very smart and seeks to use her skills to help those in need. However, Julia's behavior in this game is often very critical or hostile to most of the other characters. Julia will criticize most characters due to their lack of speed, strength or even stamina in her win quotes.

Julia studies archeology in Michelle Chang's tribal lands. As a baby, Julia was deserted in the ruins of ancient Native American settlements, where Michelle found her. Michelle rescued Julia and brought her up with love. Julia loved Michelle and her adopted tribe and trained with Michelle to protect her beloved homeland.

When Julia was 18, stories of sudden disappearances of famous martial artists all over the world began to reach the tribe.

With apprehension spreading through the tribe, Michelle left for Japan to ask Heihachi Mishima why he had sought to take the pendant during the second tournament. Michelle hoped to learn about the origin of the Ogre's power but she never returned. Julia suspected Heihachi and now seeks him out to discover the truth.

During her time in college, Julia discovered that her native homeland was in danger of being covered by an encroaching desert brought on by today's rapidly changing global ecosystem. Wanting to save her home, she began her research on ecosystem restoration. Julia joined an advanced genetic research group led by Professor T that studied the biological mechanism of reforestation, that was funded and supplied almost exclusively from G Corporation.

When she found the missing data, she also found research data about the Devil-Human Integration program and GENOCELL. Professor T asked Julia to join their search, but Julie refused and deleted all the research data, sacrificing her dream of reforestation to protect the planet.

Disappointed that she was unable to recover the reforestation data during the last tournament, Julia returns home and resumes her research. But no matter how hard she tried to continue her work, she still needed her old data. She received a mysterious letter with an invitation to The King Of Iron Fist Tournament 5. Julie joined the tournament with her dreams on the line. Julia managed to retrieved the "Forest Rejuvenation Data" after Jinpachi was defeated, and built a lab in Arizona so she could devote herself to her research. Her dream was finally within sight.

After recovering her stolen data, Julia completed her reforestation research. She was headed back to Arizona to meet with a party who had agreed to assist in the realization of her reforestation plans. Waiting for her there was a prominent Arizona land owner, an old woman who claimed to have the ability to hear the voice of spirits. With her help, the reforestation plans were on track to be realized, but when Julia got up to leave, the old woman made an ominous prediction. "Jin Kazama and Kazuya Mishima must not be allowed to clash. If they confront each other, a source of great evil will be resurrected and unleashed on the Earth". Julia was skeptical of the old lady's prediction, but after hearing news of the Mishima Zaibatsu sponsoring The King of Iron Fist Tournament 6, the danger seemed real. Julia decided that she would join the tournament. 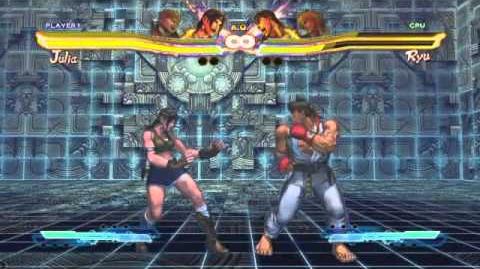 Julia and Bob as seen in their prologue

Julia on the Tekken Wiki