Trained from infancy to become a ninja. Although she carries out her duties, in reality she dreams of living a normal, high school girl life. She has a fascination with pop idols, but when she is tasked with a responsibility, she is always reliable.

Ibuki is a young girl from Japan, raised in a hidden ninja village and trained in the art of ninjutsu. She is slim and athletic, her black hair held tightly back in a topknot that drops behind, well beneath the waist. Unlike most other female ninja or kunoichi in videogames or anime, Ibuki's outfit is a more traditional type of ninja dogi, consisting of a sleeveless upper garment, baggy pants, arm guards and a mask that conceals the lower half of her face. Her footwear consists only of cloth bandages wrapped around her shins, ankles and instep. While she is a trained ninja, she also shows another side, stating that she finds her ninja clothes ugly and her daily training strange, jumping back into her civilian garb as soon as she wins a bout.

Even though she is a well-trained ninja, she is still a normal teenage girl, and states on several occasions that she finds her ninja garments ugly and her daily training strange. She will jump right back into her "normal" clothes when her regimen is over and/or when she wins a fight. She is kind, energetic, respectful, honorable, honest and a little rebellious.

Ibuki lives in a village entirely composed of ninjas where she has been training since childhood. After doing the same routine everyday and attending a school for ninjas, she wishes to live like a normal schoolgirl.

Ibuki decided to sneak away from her clan's summer training camp to compete in S.I.N's tournament, in order to meet cool and handsome guys. When the tournament was over, she realized that she was going to be late for camp and attempted to sneak back in as if nothing had happened. However, she was caught by one of the camp's instructors.

A few years leter, Ibuki was sent by her clan to procure documents from Gill's organization. These documents concern the "G-File" project, which was responsible for creating Necro and Twelve. Gill voluntarily gave Ibuki the documents, though the project was already underway by that point.

Ibuki was to track down Oro to fight him for her ninja graduation exam. She fights well enough to pass, and moves on to go to a university. While there, she joined a club which, to her dismay, turns out to be run by her ninja clan as an additional training method.

"What's a girl gotta do to get a bite around here?"
—Ibuki

Ibuki is fast and has alot of Target Combos at her disposal. Her main game relies on her ability to catch the opposition in a votex and ultimately stunning the opponent. In this game she plays similar to her Super Street Fighter IV incarnation. Ibuki's Yami Shigure attack returns as her Cross Assault attack. 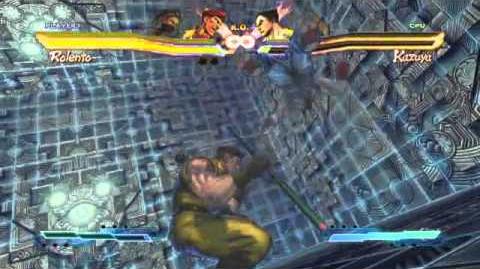 Ibuki, on the scene!

Ibuki and Rolento in their prologue

Ibuki on the Street Fighter Wiki