"I won't hold back!"
—Hwoarang

Hwoarang is a character from Namco's Tekken series who first appeared in Tekken 3, and returned in all subsequent games. He is Jin Kazama's rival, a protege of Tekken veteran Baek Doo San and one of the most popular characters in the series

A young man who usually fights with a cool composure, but in reality is a hot-blooded man looking for a good fight. In the past, he was prone to hustling people into street fights, but under the guidance of Baek, he is now fully devoted to his training.

Hwoarang is a young Korean male with neck-length, light red hair that is combed back. He wears a tight leather vest, blue jeans and black leathers chaps over them. He has a pair of goggles that he wears on his forehead.

Hwoarang is a hot-headed, impulsive fighter who loves fighting, he is sometimes very cocky, as he sometimes likes to boast about his skills and strength. He is rebellious and does not like to obey orders, this however changes if it regards Baek, to whom he shows great respect towards. He knows how to hold a grudge and retains a strong sense of pride and honor, determined to prove to everyone that he is the best when fighting Jin.

A student of Tae Kwon Do who works out at Baek Doo San's dojo, Hwoarang makes a lot of money through dishonest gambling wagers. As part of what's called a fraud team, he and other members pick fights for money. They manipulate the odds by concealing their true strength. Hwoarang escalates the odds against him and makes what appears to be a foolish wager. His opponents soon realize they're the real fools when Hwoarang soundly beats each and every one of them.

One day, members of the Mishima Group came to town, including among them Jin Kazama. Hwoarang talks them into his game and is matched against Jin. Hwoarang embarrassingly can only manage a draw. He hangs his head in disbelief at the first blemish in his perfect career. Sickened at the thought of having to tell his teacher, Baek, the bad news, Hwoarang vows to practice every day to guarantee that it would never happen again. Then, terrible news -- Ogre claims Baek as yet another victim. Hwoarang now has a purpose in life. He will participate in the tournament, beat Jin Kazama and seek revenge against the God of Fighting: Ogre.

﻿Hwoarang was drafted into the South Korean millitary and was assigned to a special operations division. Although his successes in various missions were highly regarded along with his prowess in combat, his penchant for disobeying rules and orders gave his senior officers more than a few headaches. Hwoarang was uninterested in military life and felt a strange emptiness within him. One day, Hwoarang found out about the announcement of the next Tournament. Filled with excitement he hasn't felt in years, Hwoarang slipped out from the military base and headed for the Tournament.

The South Korean Army took Hwoarang into custody during the last round of the King of Iron Fist Tournament 4, keeping him from his long-awaited fight with Jin Kazama. Hwoarang was taken to the South Korean embassy, where he was brought before the ambassador. He received an official pardon granting him immunity from charges related to the incident, and also received urgent military papers. Two months later, Hwoarang finishes his military service. With nothing holding him back, Hwoarang is free to pursue a confrontation with Jin Kazama.

During the tournament, Hwoarang defeated Jin. While lying on the ground, Jin transformed into his devil form. Hwoarang was unable to fight back, and was soon beaten. Hwoarang woke up in the hospital with Baek standing as a visitor. Hwoarang hears the details from Baek. Ignoring his nurse, he tries to move from his bed and falls down, asking Baek to make him stronger. After leaving the hospital, Hwoarang starts training with unprecedented devoutness in order to defeat the "paranormal" Jin. Thus, with the announcement of The King of Iron Fist Tournament 6, he prepares for the tournament. ﻿ 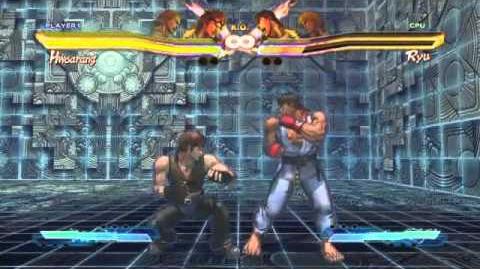 Hwoarang and Julia team up

Hwoarang and Steve's swap costumes, based on Dee Jay and Charlie Nash respectively

Hwoarang and Steve as seen in their prologue

Hwoarang's page on the Tekken Wiki