"Prepare for a lesson on the power of Bushiryu."
—Guy

Guy is a character from Capcom's Final Fight series who appears as a DLC character in Street Fighter X Tekken.

Guy is usually portrayed with prominent bangs that are long enough to cover his eyes, but their length seems to vary based on the artist. Guy wears a crimson, sleeveless ninja gi with a white outline, with a wire mesh shirt underneath for defense. He also wears Nike Dunks sneakers.

Guy is calm and reserved, with a sharp mind and a noble spirit. He is a stoic warrior who carries out his duty as a ninja with an almost professional air of detachment. His grim face rarely shows any emotion, with the most noticeable one being occasional shock, such as when he saw the fate that befell Cody. He dislikes interfering in the lives of others, and believes everything should be left as is, only fighting when he deems it necessary. He is fiercely protective of his allies, as shown by his interactions with Rose, urging her not to sacrifice herself to defeat M. Bison, and rescuing Maki from Bison in her ending, despite her attempts to defeat Guy to become the 40th Bushin grandmaster.

Guy was born somewhere in the United States of America to Japanese parents, having moved there very early in his life. He was a delinquent in Japan in his youth, until he met the 38th Bushin Master Zeku, who took him as a student, together, they revived the secrets of Bushin Ryu Ninpo (Spiritual Warrior School of Ninja Arts).

When Mike Haggar is elected as the mayor of Metro City, he vows to his people to clean up the streets. However, the Mad Gear Gang have other ideas and even kidnapped Mike's daughter Jessica to make sure he cooperates with them. Haggar does not see the point in negotiating with them, and so he, alone with Cody and Guy, take off on an adventure to defeat the Mad Gear. They split up to look for Jessica. Soon, Guy encounters Sodom, and they square off in an underground fighting ring. Guy eventually defeats him in combat and continues to look for Jessica.

He travels to the industrial district of Metro City in his search, and after defeating waves of members, he runs into Rolento, another member of the Mad Gear. As they battle, Rolento is impressed with Guy's ninja skills and even offers him a position in Mad Gear. Guy, however, neglects the offer, countering that as a Bushinryu practitioner, he is sworn to fight evil. Guy defeats Rolento with honor and scars him with a kunai to his face. Guy and Cody head to the bay area to confront the wrestler Abigail. He tells Cody that the leader of the Mad Gear, Belger, is having a good time with Jessica, so Guy rushes off to save her from this leader.

As Guy fights off Abigail in a tough battle, he wins the battle after knocking him down. Later on, he meets up with Haggar and Cody who are heading uptown where Belger and Jessica are. When they arrive, Cody uppercuts Belger out of a window. Haggar hugs his daughter. Cody and Guy disappear, knowing that the battle is far from over and there is still work for the heroic warriors to finish. Jessica chases after them and calls out to Cody. He tries not to look at her while he keeps walking. Guy then hits Cody, hoping for him to explain his decision to Jessica. This episode is long remembered and a few years later, flyers can still be seen posted in many alleyways with the trio's smiling faces, proclaiming The heroes saved our city.

The Mad Gear have returned. While biding their time, Guy and Cody are absent (Guy having travelled to Japan, for further training). The Mad Gear strike and kidnap Guy's master, Genryusai and even Rena, Guy's fiancee and Genryusai's daughter. Haggar teams up with Rena's sister Maki and Carlos himself, who is a South American swordsman, to get them back. They are successful, and when Guy hears of the story, he writes to them and thanks everybody, stating that he will be back soon.

Guy continues his training, which is now almost complete, the grandmaster of Bushinryu style, Zeku, acknowledges him as worthy honorable potential successor of the art itself. Zeku states that there can only be one grandmaster of the art at a time, and he reveals that they must battle each other to determined who shall lead. In the end, Guy wins the honorable battle, and Zeku names Guy as the 39th heir to the Bushinryu art, and warns him of a great evil which threatens to control the world and its people, Guy resolves to defeat this evil that his predecessor warned him of.

A few years latter, Zeku spoke of Shadaloo, an evil company that desires to rule the world, Guy seeks to destroy it and take down Bison himself for all of the evil that he has done to others,as he travels, he encounters the.powerful Rose, who, just like Guy, is set out to defeat M.Bison himself, Guy attempts to dissuade her from eher quest to protect her, but she continues on regardless. As Guy continues his scarch for Bison and his men, he finds Cody, this reunion is not a happy one: Cody restless for.fighting has been unable to adjust to a peaceful life style like Guy himself. He has become a heroic vigilant, and has been locked up for his rampage on crime. Guy then realizes that Cody's fight was never motivated by Justice,but a love of fighting and testing his strength against worthy opponents. The two warriors then had their own fight. Guy understood that his friend.lived his his own life.. When he asked if Cody would.stay in Metro City, he replied that he still had traveling to, and the two separated. Guy respectfully bid him fairwell, knowing that Cody still values life and is still a hero. Guy is then confronted by a Businryu warrior, Maki, who challenges him for his title in battle. Guy however, does not see her as a worthy ninja for the title, after the fight, Maki accept defeat at Guy's hands, but states that she will not give up as she leaves for more training, when Guy finally gets to Bison, he finds Rose unconscious and Bison injured by Ryu's Satsui no Hadou, he Carries her to get her treated and healed up, as he holds her, he feels an evil power, unknowing to Guy, Bison's soul has latched on Rose as a host body, Rose however, lives, and everything is.back to normal until Bison returns.

Following the defeat of the Mad Gear during the events of Final Fight 2, a gang war erupted in Metro City. Following his training, Guy returns and meets up with Mike Haggar once again. The Skull Cross Gang then detonates Metro City, freeing their leader, Mr. Black, from jail. Lucia Morgan and a mysterious street fighter known as Dean helped Guy and Haggar fight this gang. Guy defeats Mr. Black by knocking him down through the electric generator, ending the Skull Cross Gang.

S.I.N., a branch of Shadaloo, floods Metro City with weapons. Guy goes to find the C.E.O. Seth and stop him in his plans for world conquest. Guy encounters his old friend Cody and asks him to help take down Seth and his company. Cody, however, tells Guy that people change and so has he. Guy finds the S.I.N. base and sees Rose being taken by Bison. Guy appears on Bison's plane and threatens to destroy it if he does not hand her over. Bison had given her up due to him not being able to put up a fight due to being in a weaker body. Guy wakes up Rose, who is surprised to see him. Later on, he sees his friend Cody, saying that he has noticed that Cody only fight criminals and evil individuals, implying that he is still a hero. He then asks Cody whether he will return. Cody, however, replies that he is returning to his cell, as that's where he belongs. 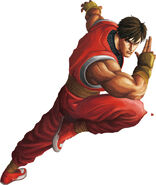 Cody and Guy as seen from Hugo and Poison's reveal trailer

Cody and Guy as seen in their prologue

Cody and Guy as seen in their ending