Guile is a video game character in Capcom's Street Fighter series of fighting games. He is considered the third leading and most popular male character in the series, after Ryu and Ken, largely due to his effectiveness as a character and his popularity. Guile has the USAF rank of Major at the time of Street Fighter IV.

A military man who specializes in hand-to-hand combat. In the past, he had a countless number of encounters in the battlefield, and understands that war requires callousness. While he is not one to talk much, he has a strong sense of justice.

His physical appearance is strikingly different from the many Asian characters in the Street Fighter series, with light blue eyes, a chiseled jaw, and a particularly tall flattop haircut. He has a tattoo of the United States flag on both arms. Guile wears baggy camouflage pants, military boots, a dark green muscle shirt, and he also wears Charlie's dog tag alongside his own.

Guile is tough, both physically and mentally. He has lived through a lot, and is still standing as a hero, as well as still fighting for good. Although loyal to the Air Force and the United States of America, Guile is extremely persistent in his goals. Despite this, he is a truly loving husband and father to his family, they often worry about him and the missions he goes on to protect the country.

When Guile was a trainee in the United States Air Force, he befriended his superior officer, Charlie and asked him to teach him in his unique form of fighting, which Charlie agreed to do. Guile has a wife, Julia, and daughter, Amy. Also, Julia and Eliza are actually sisters, making Ken and Guile brothers-in-law.

Guile is sent by the United States Air Force to look for his senior teammate and best friend Charlie, who has gone missing during a secret investigation. Guile's search eventually leads him to the Interpol investigator Chun-Li, who warns him not to follow Charlie due to the danger involved. Guile demonstrates his fighting ability, and assures Chun-Li that he will not let their friend come to harm. He eventually finds the Shadaloo base in Thailand.

Guile informs Charlie that they do not need to be there any longer, as an aerial bombardment will begin in an hour. Charlie, however, insists that Bison will escape, and they come to blows. M. Bison appears and attacks the two soldiers, but is no match for their combined teamwork. He is forced to retreat, calling a gunship to keep them pinned down and cover his escape. The two follow Bison to his base, deciding that Bison's source of power, the Psycho Drive must be destroyed. Chun-Li then appears and informs them that the bombardment has been called off, surmising that Bison has somehow used his influence. She tell them that she has set explosives in an attempt to destroy the base. As she rushes to escape, Charlie and Guile decide to set explosives around the the Psycho Drive to ensure that it at least will be destroyed.

As they set their charges, meanwhile M. Bison was fighting with Ryu, in the end Ryu defeated him destroying his body temporarily, forcing Bison to regenerate in the Psycho Drive. Bison sucessfully regenarated his body then Charlie convinces Guile to escape while he holds Bison off, so Guile escapes right before the base explodes, with Charlie and Bison presumably caught in the blast. Chun-Li and Ryu eventually find Guile standing on a mountain.

Holding Bison responsible for the death of his best friend, he is eager to take revenge on Bison, who has somehow survived the explosion. A court case against the Shadaloo dictator fails when Bison bribes all the judges to let him go free. Bison by this time wants revenge on Guile, Chun-Li, and many other people who had hindered his syndicate's efforts. To this end, he sets up the second World Warrior tournament to trap them, among other reasons. Guile takes the bait, deserting his wife and daughter to pursue the vendetta.

He manages to force Bison into submission and asks him if he remembers him or his friend Charlie. While Bison admits that Guile is stronger than before, he ignores the question and dares Guile to kill him. Guile hesitates and relents, realizing that he should not become the murderer Bison is. Akuma "kills" Bison with the Shun Goku Satsu shortly thereafter. Guile visits Charlie's grave, admitting that no amount of revenge will bring him back and he destroyed his family. Julia and Amy show up, telling Guile that they are willing to forgive him if he is willing to come home. Guile re-dedicates himself to being the best husband and father he can be.

Though his vendetta is concluded, Guile still believes it possible that Charlie may be alive, due to the fact that his body was never recovered, and demands that his superiors allow him to continue the search. His commanding officer refuses, and Guile tenders his resignation. His superior ignores the resignation, assigning Guile to the investigation of S.I.N.. Guile is at first incredulous that Shadaloo lives on without Bison, but soon accepts his new assignment. Recruiting Chun-Li to the investigation, the two enter a new tournament organized by S.I.N., in the hopes of infiltrating its headquarters.

Over the course of the tournament he encounters Abel, who seems to recognize Guile's Sonic Boom attack. Since only he and Charlie know this attack, Guile comes to the conclusion that Abel has information on Charlie's ultimate fate, and immediately starts pressing him for answers on where he saw the Sonic Boom before. Abel is completely unwilling to share such sensitive information with a stranger who could easily be a spy, and they engage in battle.

Later, in the S.I.N. headquarters, Guile recovers important data while Chun-Li is trapped by Vega, with the base's self-destruction imminent. En route to rescuing Chun-Li, Guile is ambushed by one of Bison's cyborgs. Abel arrives and takes on the cyborg instead, telling Guile where Chun-Li is and telling him to hurry. Exactly how Chun-Li is then rescued is unclear - Gen seems to have protected her from a collapse and then broken free from the rubble, but is nowhere to be seen later as Guile and Abel watch the base explode, with an unconscious Chun-Li in Guile's arms. Guile returns to Charlie's grave, placing a beer bottle on it as a way of buying his old friend a drink.

After a tireless search, Guile finally finds Charlie (or rather Charlie is the one who finds him), and despite noticing the physical alterations in his body and being eager to know what happened to him, he has little interaction with him during A Shadow Falls, because he handled the situation professionally (he was in a work context). Because Charlie is no longer the person he had met, he understands that his ways have already separated, and he lets him go, but not before returning his dog tags to remind him that they will always be friends. In addition to that he is already a friend of Abel, the two work together and Guile advises and guides him on how to act. He respects Karin a lot and collaborates with her in the operation to stop the Black Moons, and meets a mysterious woman (Kolin) who feels for him immediate antipathy, leaving him intrigued by her acting and fighting style. Unbeknownst to him, she was responsible for the resurrection of Charlie Nash.

"If you want to survive, learn how to keep a cool head."
—Guile

Guile is the first of many characters to introduce the "charge" gameplay style, in that a player must hold in a direction for a few seconds and press in the other afterwards to pull off a special move. This type of gameplay can make Guile a defensive character. Because of the short lag after his Sonic Boom, though, he can follow it and use his various forward-moving attacks to pressure the enemy, which makes him offensively very powerful as well. 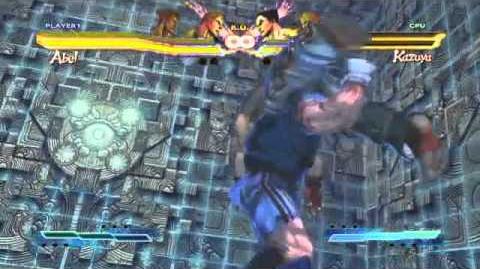 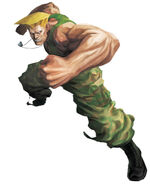 Guile and Abel prepare for battle

Guile on the Street Fighter Wiki