"I hope you are willing to have a fair fight."
—Dhalsim

An Indain priest who is a master of yoga. His ability to stretch both his arms and legs and to spew fire from his mouth are all a result of his miraculous yoga powers. Although he is hesitant to harm his opponents, he continues to fight for himslf and his family.

Dhalsim is often depicted with having pupil-less eyes. His build is that of a normal man who exercises and weight trains regularly except for his abdomen and waist which appear much out of proportion and emaciated. He wears torn saffron shorts as his only clothing attire as well as saffron wristbands and anklebands. He has three colored stripes adorning his head, and in the Street Fighter Alpha series, he wears a turban that he removes before battle. The skulls he wears around his neck are those of village children that died during a plague.

Dhalsim is stoic, serious, self-disciplined, humble and very stern when needed. Being a pacifist, he will never hurt more than necessary or kill an adversary, even the most dark-hearted ones such as M. Bison and Akuma, his pacific beliefs also allow him to be a greatly loving father and husband towards his family, just like Guile is to his own family.

Being an extremely altruistic man, Dhalsim fights mostly for the poor and oppressed, as he constantly tries his best to raise money for his poverty-stricken people. In contrast with Ryu's youngster (but still serious and self-focused) type, Dhalsim has a more "mature" and less "enthusiastic" nature, as he regularly relies on his traditional yoga meditation rites to expand his spirituality and keep his inner neutrality off any emotional involvement that may prejudice his discipline.

Dhalsim raises money to save his village, and gained the respect of villagers (some call him "Great Yoga Master Dhalsim"). He questions what good could come from his damaging powers.

Dhalsim sets out to fight the evil M. Bison. He travels around the world and met Rose and Birdie, and used his mind control powers to get his answers. He later confronted Bison and destroyed the Shadoloo base, but this is not canon.

Dhalsim enters the tournament to raise money for his village and watch Ryu's training as well as Sagat, but realizes that it contradicts his pacifist beliefs. Dhalsim retired from fighting after the second World Warrior tournament, and continued to roam the world helping those in need.

Dhalsim enters the S.I.N. tournament to free the flow of water to his village after S.I.N. builds a dam upstream. His son, Datta, is a penpal of Amy, Guile's daughter. When Datta informs Dhalsim that his penpal's father is away on a mission, Dhalsim recognizes that the situation is even more serious than he thought if Guile is investigating it. He is reluctant to use his powers for self-serving purposes, but feels compelled to save his village.

Dhalsim goes to participate in the tournament S.I.N. was organizing. When the dam base is destroyed at the end of the game, the water returns to the village. Although Dhalsim believes that Shadaloo represents an evil in the heart of humanity that will never truly be defeated, he also recognizes that "the goodness in mankind's heart is also endless".

"This is also destiny..."
—Dhalsim

Dhalsim is the original long-range fighter of fighting games. Dhalsim's intense training has given him the ability to project his arms and legs outward in order to deliver attacks that would be out of the range of normal limbs. Dhalsim's fighting style involves keeping the opponent at bay with distance attacks and projectiles, and optimally, only getting close to strike with a surprise aerial attack or sliding kick. Due to his reach advantage, Dhalsim has both very low offense and defense, making it vital for him to avoid sustaining too many blows from a strong fighter. 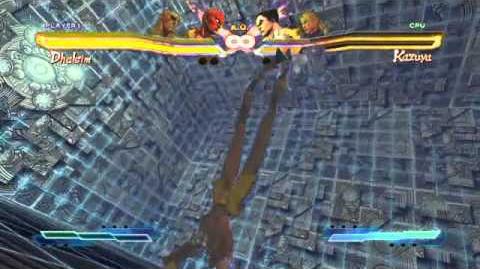 Dhalsim at the Street Fighter Wiki