"Seems like you've got what it takes. For the moment."
—Chun-Li

Chun LI is the first-ever female playable character in a one-on-one fighting game and in the Street Fighter series. Introduced in Street Fighter II, Chun-Li was the only female character in the game, and has become one of the most iconic females in video game history. Portraying a fierce and strong opponent with a unique fighting style.

An Interpol detective that continues to track Shadaloo in order to learn the truth about her father's whereabouts. While she stands firm against the forces of evil, she is also a cheerful, innocent, and stunningly beautiful woman.

Chun-Li wears the blue qipao, a Chinese dress imported over from Manchuria, yet popular among girls during the early 20th century. Her outfit is modified to allow a far wider range of movement than a normal qipao. She also wears white combat boots and blue leotard with dark brown sheer pantyhose with her qipao. Her qipao is blue with golden accents. She was originally supposed to wear a peach-colored qipao, as seen in her in-game profile and ending in the original Street Fighter II. She is known for her very muscular thighs. She is 5 feet 6 1/2 inches according to her Street Fighter Alpha 3 biography. Her hairstyle is called "ox horns", a typical style in which Chinese children dress their hair; depictions of girls in Chinese paintings frequently show girls in ox horns.

Chun-Li is generally a cheerful (occasionally princess-like) and serious woman. She is often happy and excited when she wins a fight, but hates being defeated. As part of her job as a cop, she takes it very serious, and will do her best to complete a mission. When it comes to fighting, Chun-Li tends to get quite competitive with her opponents, but after fighting most of them, she may become allies or even befriend them. She also wants to continue to grow stronger, due to past experiences fighting her most powerful foe M.Bison.

In the Street Fighter series Chun-Li was an Interpol investigator who had been searching for clues to the recent death of her father. Getting into a friendly spar with an old teacher of hers and friend of her father, Gen, he gives her a lead into who may have killed her father—the mysterious crime syndicate Shadaloo. Finding its leader, M. Bison, she demands he tell her what happened to her father. To her surprise, Bison attacks and basically makes quick work of her, then flies away, laughing at her and telling her if she attacks him again he will kill her just like he did to her father. With tears in her eyes, Chun-Li swore revenge.

Chun-Li teamed up with a United States Air Force member, Charlie, to try to track and take down Shadaloo. She then ran into someone she would not have expected at all. It was Charlie's good friend and fellow lieutenant, Guile. Telling Guile he should not get in over his head and to leave the two be, Chun-Li learns he has orders to bring Charlie back. Attempting to use force to stop him, Guile immediately appears and holds her in his arms telling her that she can't force Charlie to not make what is right and for good intentions; nonetheless, she insists that she and her partner be left alone, to which Guile replies that he will never abandon friends in need.

Eventually, learning that Bison tricked the Air Force into canceling the planned bombing of the main Shadaloo base, she rushed over to the two soldiers to tell them they were tricked and would have to destroy the base on their own. Chun-Li with Charlie and Guile proceeded to the Shadaloo base located in Thailand to plant bombs around the base as Charlie and Guile headed inside to destroy the Psycho Drive, but Guile then came rushing out, grabbing Chun-Li and telling her Charlie had urged both of them to get away. Meanwhile Ryu was fighting with M. Bison. Along the way Chun-Li saw a young girl escaping with several others (who turned out to be Cammy) and she found Ryu and escaped with him. Later Guile told her that Charlie was inside of the Shadaloo base during the explosion marking his apparent death in the process. Despite being distraught over the initial lack of evidence to prove Shadaloo's crimes, Chun-Li managed to shut down the operations of the Shadaloo evil empire.

Chun-Li received an invitation to the second World Warrior tournament, and discovered that Bison had apparently survived the Thailand base's destruction. With this, she had the clear motive of destroying Shadaloo and avenging her father once again. The outcome of this tournament is not clear. There has been no definitive answer as of yet, although regardless of the outcome, Bison himself finally falls at the hands of Ryu's nemesis, Akuma.

After retiring, Chun-Li finds life less than what she had hoped for, still feeling uneasiness. Soon she is tracked down by Guile, who reveals to her evidence of Shadaloo's return. Donning her outfit she returns to Interpol and teams up with Guile and Cammy to take down S.I.N. and discover what really happened to M.Bison. She enters the new international fighting tournament to take down S.I.N once and for all. On her way, she is approached by Abel, who is searching for any leads on the Shadaloo organization.

During the tournament, she also pursues Gen, who is also participating, for more answers about her father's death; Gen refuses and she is unable to force him.Later she encounters Juri who she trys to arrest and although she is able to defeat her she is unable to bring her into custody. Infiltrating the S.I.N. dam facility, she is trapped when Vega activates the base's self-destruct sequence. She is protected from the ensuing collapse by Gen, and is eventually rescued by Guile and Abel. After the tournament she tells Guile that she is not just fighting for her father but also for herself, and that she will continue to be a cop.

Three years later, Chun-Li continued her work as a cop, and retired from street fighting bad guys to teach children fighting athenfter taking down Shadaloo for good. Urien kidnapped a young girl for his scientific projects. Later Chun-li reclaims the young girl. Since then, Chun-Li has continued to raise her adopted kids and students, and continues to train them.

"Father...please keep looking out for me."
—Winning quote

Chun-Li is the original fast character in the Street Fighter series, utilizing multiple rapid attacks rather than the slow damaging strikes of larger characters like Zangief. Her agile and swift movements are a favorite amongst game-players. It is interesting to note that in the early days of arcade fighting games, many other female characters played in a similarly speedy style, following the example set by Chun-Li. In previous games (Street Fighter 2 mainly) she was basically a charge character along with Guile and E.Honda but her style was changed in later games to give her a more technical feel as well as her trademark "speed" granted to the player. 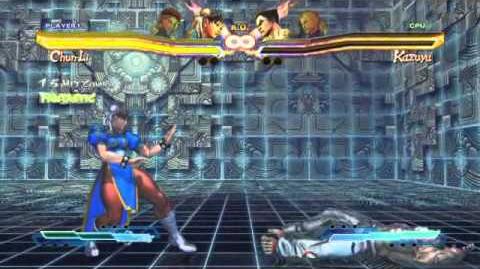 Chun-Li under the influence of Pandora