"Check out the perfect fighter."
—Bob

Robert "Bob" Richards is a character from the Tekken series who made his debut in Tekken 6. Bob is a renowned martial arts prodigy from the USA.

A man renowned as a bounty hunter who developed his body to immense proportions in order to fight larger opponents. While others vehemently disagree, Bob believes that he now has the "perfect body".

Although large in size, Bob is a very swift and agile character. He sports a red dress-shirt with blue suspenders, black shoes, and black-lace gloves. He also sports short blonde hair, blue eyes, and a goatee.

Although he is incredibly smug and stoic, Bob is a gentle and kind-hearted man who fights for justice and peace. It is also hinted in his and Julia's cinematic ending that he has affections for her declining his reward money to win her affections while stating "The journey itself was sort of a reward. That's more than enough for me.".

Heralded as a master of the martial arts from a young age, Bob's chiseled body and handsome face gained him many fans, but he couldn't win against larger opponents. In order to devise a special training regiment that increasesd power and weight while maintaining agility, he vanished from the public eye.

After years of training, Bob returned. Those who knew him before were astonished and disappointed at his transformation. His handsome looks were gone, and he appeared to have just gotten fat, but he was very proud that he had attained a body with the perfect balance of speed, power and weight.

After the tournament, Bob became a worldwide sensation. His schedule was filled with TV and magazine interviews, with his training secrets becoming unearthed. One day he awakes to the horror that all of his famous weight vanished.

"Man, you're just like school in the summer. No class!"
—Bob 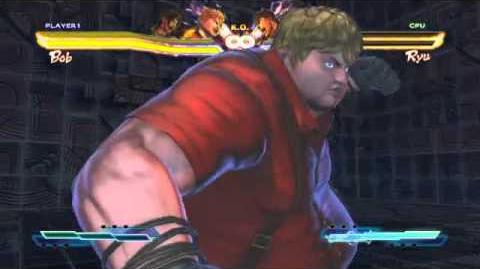 Julia and Bob as seen in their prologue.

Bob as seen in Zangief and Rufus' reveal trailer.

Julia and Bob's swap costumes, based on Chun-Li and Ryu respectively.

Bob on the Tekken Wiki