Akuma ("Devil" in Japanese), known in Japan as Gouki, is a popular fighter as well as a popular character in the Street Fighter series and UDON comics. He is known as "The Supreme Master of the Fist".

The wielder of the Satsui no Hado, a man called "the master of the fist," who has slaughtered opponents with the ferocity of a demon. He searches for strong opponents to do battle with in a game of life and death. He has sent numerous fighters to their demise. He has a keen interest in Ryu, the disciple of Akuma's brother Gouken, as he has the potential to bring forth the Satsur no Hado from inside him. Because of that, he appears no to guide Ryu to the box in the Antarctic.

Akuma wears a black gi, but varies in the series (occasionally displayed as blue in artwork). He has red hair, sharp, pointed teeth, and is often bare-footed, though some games have him wearing brown sandals. He has a tanned skin and crimson eyes, and wears his deceased master Goutetsu's prayer beads around his neck, with a visible black Ten kanji on the center bead in some games. He was seen with a black belt around on his gi, but is now replaced by a tightened rope around his gi. On the back of his gi, he has a red Ten kanji that sometimes appears glowing during certain win poses. He is an inch taller than Ryu.

Akuma is a seemingly brutal, angry, quite honorable and proud warrior who is always training and has contempt for true weakenings. He is rarely, if ever, seen smiling and enjoys fighting fromidable warriors, such as Ryu. He also hates it when somebody actually interferes with his training. He is very serious in a fight and enjoys getting stronger. In his conversations with many fighters, he tends to talk about their fists and his own. He truly hates Gouken for not using their fighting style as it is intended to be used, and hates him even more for sealing off the Satsui no Hadou in Ryu. He is very independent and fights alone, and thus has no true partner in SFXT.

Akuma trained under Goutetsu along with his brother Gouken. Goutetsu taught them Ansatsuken (Assassin fist) in the from of karate along with a mixture of judo and koppo. As the brothers progessed under Goutetsu's teachings, a dispute arose on the true nature of Ansatsuken karate and the path to master it. Gouken did not accept the violent nature of their art and left Goutetsu and made his own dojo. Akuma continued to use the art as it was intended to be used for, killing. In order to learn Shun Goku Satsu (Raging Demon), Akuma embraced the Satsui no Hado. After he embraced the Satsui No Hado, Akuma gave up any compassion he held towards other human beings and lost all of his humanity and left Goutetsu's guidance to train alone on an island known as Gokuento. Akuma returned and demonstrated his power by killing his master Goutetsu, and removed his beaded necklace and placed it on his neck. The following day he challenged Gouken to a fight but lost. Akuma requested death in defeat but Gouken did not want to kill his own brother, and Akuma said he would return. Many years later Akuma face his brother again and struck him with Shun Goku Satsu and believed he had killed his Brother. Ken saw the flash of the attack as was returning from the U.S. Martial Arts tournament, ran to the surrounding woods and searching for the killer. Akuma easily defeated Ken and disappeared. Ryu soon learned of his master defeat from Akuma and begin searching for him.

Akuma first fought Ryu on his island and discovered the potential to use the the Satsui no Hado within him. Akuma destroyed his island with a karate chop and told him to fight him again when he had embraced the Killing intent to and see who is truly more powerful. After that Akuma went to fight , The former master of Chun-Li and her dead father, as they fought in battle, Akuma had found out that Gen was already dying and was sick, Akuma, who would find no satisfaction in killing someone who is already dying, stop the fight and disappeared leaving Gen, Akuma was on the Great wall of China and was thinking about the fighters he has fought, and said he would be the next one to die.

Akuma interupts the final round of the 2nd World Warrior tournament to challenge Ryu. He attacked and killed Bison with his Shun Goku Satsu, and challenged Ryu to a fight but the resaults where unclear.>

While meditating, Akuma senses the Satsui no Hadou reemerging within Ryu. Immediately, he sets off to find Ryu and help him realize this power so he can try to kill him in battle. Eventually, he finds an unconscious Ryu in the care of his brother Gouken. Akuma challenges Gouken to a fight, with Ryu being the prize. Both survived their fight, and Ryu was saved by Gouken.

Akuma had trained relentlessly until finally harnessing his power and learning several new techniques. He attacked Gill and killed him using the Shun Goku Satsu, although he left without realizing that Gill had resurrected himself. He then challenged Oro to a fight. Though mutually impressed by each others power, both men expressed some contempt for the other on a personal basis.

"I have surpassed the limits of mere mortals"
—Akuma 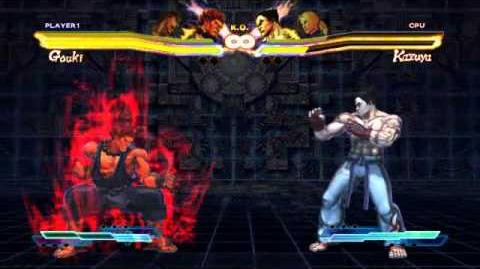 One of Akuma's Super Arts

Akuma on the Street Fighter Wiki

Akuma on the Tekken Wiki