Abel is a French mixed martial artist from the Street Fighter series who first appeared in Street Fighter IV. He is described as amnesiac, a "man with no past" looking to defeat surviving members of Shadaloo.

A young man that was created and destined to become a replacement body for M. Bison. He was discarded as a faulty product, but managed to survive. In order to find out the truth about his past, he pursues Shadaloo.

Abel is a very well built individual. He towers over many of the other characters, being almost on par with Zangief in terms of bulk. He wears a blue Judo gi top with white spandex shorts, and blue shin guards and thick grappling gloves. He has blue eyes and sports a Faux Hawk, and is covered in scars from head to toe; most likely from being experimented on or from being damaged in the wreckage he was found in.

Abel is a strange, yet a very skilled fighter in combat. He usually talks about the "battle field." He fights to try and recover his memory, so most of the cut scenes you see him asking someone a question. If not, usually someone asks him a question, threatening him as well. Of course, having no memory, he gets agitated and simply gets ready for the fight. He is a man of little words simply trying to find himself. His quiet nature is often mistaken for aloofness and emotional detachment, but in truth, Abel is a kind and compassionate man, though his amnesia has caused him to develop a tough outer persona. By the time of Street Fighter IV,though he remains somewhat aloof, Abel has become more sociable and friendly to his allies, thanking Chun-Li, and giving El Fuerte chocolate. He also shows a soft spot for puppies and seems to be a fan of Fei-Long.

Abel is actually a clone of M. Bison meant as a replacement body created for him should anything happen to his body. He was to be disposed of with the other failed creations, but he alone managed to survive and escape. Abel was found in an abandoned Shadaloo base suffering from amnesia and raised by a mercenary in France. Abel claims that the man who found him died recently, and Abel feels that he has had no family. After finding a stray puppy and taking him in, he starts a journey of discovery to find who he really was and where he came from, after which he says he will be able to name the dog. He first goes to the detective, Chun-Li, who is investigating Shadaloo. Upon hearing his connection to Shadaloo, she recommends that he participate in the S.I.N. Tournament to learn more about his past.

During the course of the tournament, he comes across Guile, who is able to use the moves the soldier he was nursed back to health by had used. When Abel recognizes Guile's techniques, Guile realizes that Abel must have known Charlie, and immediately starts pressing him for answers. Abel refuses to reveal secrets to someone he's never met before and their fight escalates. Guile then learns that the man who saved Abel could use the Sonic Boom, and tells Abel that it must have been Charlie. Abel also encounters Fei Long at some point, and the movie star is impressed with the mercenary's ability. Abel eventually arrives at S.I.N. headquarters around the same time as Guile and Chun-Li. As Guile races to rescue Chun-Li from Vega's trap, Seth (or one of the 26 copies of Seth) stops Guile in his tracks. Abel tackles Seth, allowing Guile to reach Chun-Li before she dies. Abel is surprised to find that he and Seth look identical. Abel is called "imperfect" as Bison appears from behind and destroys "Seth". Bison allows Abel to leave unharmed for unknown reasons. Abel is later seen looking at the ruined S.I.N. base with Guile and an unconscious Chun-Li.

After the tournament, Abel informs Chun-Li that he's going to go on another journey to find more answers. He also goes to Fei Long, warning him of the dangers he may face from S.I.N. and offering to help.

Abel was the first person to be chosen by Bison to be converted into a doll (Seth - alike). Unlike other dolls which are marked by number, this successful one was named "Abel". Based on Udon's Street Fighter 4 comic, after Bison's doll No.15 lost his battle with Akuma, his head was kicked hard, resulting in the software installed by Bison being destroyed and No.15 becoming free. He named himself Seth. "The first incubator to have a name was my brother, Abel. A character in a book I read with that name had a younger brother, his name would be an appropriate one. From this moment I'm no longer 15, I am SETH".

"What a great fight! Thank you."
—Abel

Abel has a very aggressive fighting style. He's mainly a grappler, and many of his moves either chain into a throw or set a foe up for one. Since he moves rather slowly, one would assume he would have a difficult time getting close enough to throw an opponent; however, most of his techniques get him either behind an enemy or right in their face. Abel is also capable of grounding enemies that like spending time jumping around, getting very close in the process. Abel is a strong character who needs to get close to finish a fight, and he's very good at doing it. Because he has great combo potential, and lacks a projectile Abel is generally played as a rushdown based character. He is also equipped with a good variety of crossups and overheads. 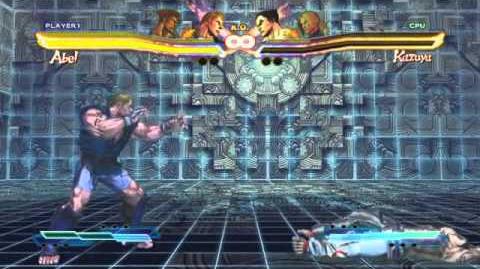 Guile and Abel prepare for battle